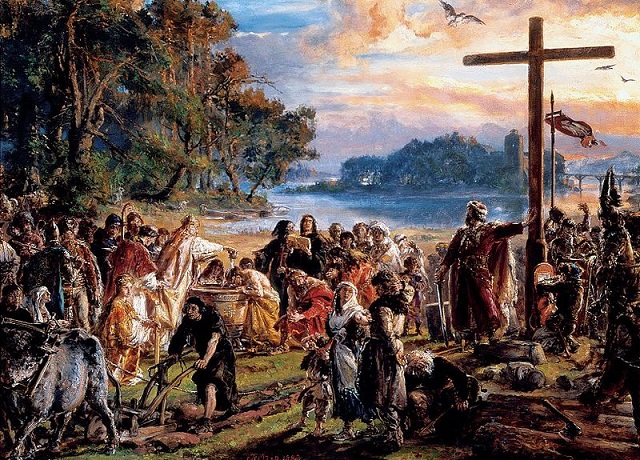 This year Poland is celebrating the 1050th anniversary of its baptism, which took place in 966.

This act began a gradual process of Christianization of the Polish state and introduced our nation to the community of the Church - including the country in the circle of Western culture. Since then, Poland began to draw abundantly from the Greek and Latin traditions, which manifested itself in literature, painting, architecture, sculpture, morals, ethics and norms of the Roman law.

Mieszko I, who mad this significant choice, provided his country with the only effective in the 10th century model of organization of the state, placing Poland among the countries of Christian Europe.

In the opinion of several historians, maintaining Poland as a sovereign state without this act could not be possible.

The fact that the first historic ruler of Poland engaged in the construction of the church organization on Polish soil, clearly indicates that he was not only driven by political motives.

The most important reason for this move was the fact that pagan Poland could not establish a stable and normal relations with the countries of Christian Europe, and it was impossible for the young country to have an efficient foreign policy, which would ensure the country’s security.

Pagan country, at least in this part of Europe, could not have diplomatic correspondence and conclude treaties with neighboring Christian states.

Christianity attracted Mieszko I also for other, internal, reasons. As a pagan, he ruled with the approval of the public, but as a Christian ruler - from the will of God. Therefore, the country’s dignitaries and nobles were obliged to be faithful to such a ruler, as same as the apostles to Jesus Christ.

Furthermore, the baptism contributed to a further unification of the young Polish state, where establishing of the Church hierarchy made the administration of the country much easier.

The baptism itself is a very crucial moment for every Polish person, because it not only constituted our state, but also the national identity, which integral - or I should say fundamental – part became Christianity.

Although the young Polish Christianity had to overcome severe crisis due to the collapse of the power in the late 30’s of the 11th century (the Pagan reaction in Poland), however, in the following centuries the Christian faith has played a huge role in the history of the Polish state and nation.

During the regionalization of Poland, Christianity was - both in terms of organization (the metropolis of Gniezno) and ideology (the cult of Saint Stanislaus of Szczepanów) - the main factor of integration, which ultimately led to the reunification of the Polish state. The first Polish university was founded in Krakow in 1364 under the auspices of the Church. In 1385, the Catholic religion became the basis for the political union with Lithuania, which ultimately led to the creation of the Polish-Lithuanian Commonwealth.

Polish translation of the Bible from the late 16th century by Polish Jesuit, Jakub Wujek, contributed to the literary language and the final shape of today’s Polish language. The religious subject-matter - starting with the David's Psalter of Jan Kochanowski, and ending with translations of the Bible by Czesław Miłosz – have been continuously present in the Polish literature and art.

At the time of the partitions of Poland, the Catholic Church has become the mainstay of Polishness, the foundation of the modern Polish nation. For this reason, the Church in Poland was persecuted - especially in the Prussian and Russian partition. During the Second World War, both Nazi Germany and the Soviet Union – being fully aware of the role of the Catholic Church in the life of the Polish nation - subjected it to cruel repressions. Thousands of Catholic priests were killed in German concentration camps and Soviet gulags. Also, immediately after the war, the communist authorities of the Polish People's Republic (PRL), especially in the Stalinist period, persecuted the Church and its faithful. Many priests and bishops were imprisoned and tortured, where the most significant example of this period is a Polish prelate of the Roman Catholic Church, and the Primate of Poland, Cardinal Stefan Wyszyński.

The Catholic Church during the communist times in Poland - thanks to the prudent, but equally uncompromising politics - played a significant role in the recovery of subjectivity by the Polish society. Without the Polish Church, its authority, and the teachings of the Polish Pope John Paul II, there was no chance of creating the “Solidarity” that shook the Soviet empire. The activities of the movement, and above all, the attitude of John Paul II initiated the fall of communism and the restoration of democracy to millions of people in Europe.

On that note, it is worthwhile mentioning that an important feature of the Polish Pope’s thinking of Poland is very clear contextual approach. The uniqueness of the idea of Polishness is expressed in the fact that it is based on the rich historical context and spiritual experience of Europe.

The cultural unity of Europe is expressed through the baptism of its nations, which brings them together in a common history, which is also their national one. Christianity brings into the history of the nation the universal values associated closely with the vision of humanity. It is a transnational factor, which is conditioning and favoring an ethical order of the national and international life.

Through the baptism, Poland entered the community of European nations, and brought in its own contribution.

Due to John Paul II interpretation, the climactic moment for the formation of the Christian idea of Polishness is the Christianization of Lithuania, through which it has fulfilled its historical vocation of closer union with other nations.

Subsequent Polish-Lithuanian union concluded in Lublin in 1569 has therefore religious and ethical roots. Although in many respects it was not free from defects, it expressed the Christian idea of brotherhood and unity of nations, capable of creating a political community based on the common culture.

The Union of Lublin was not only the regional event. Just as the mentioned above baptism of Lithuania in 1386 ended the phase of the Christianization of the European continent, the Union of Lublin determined the closer meeting of the Western and Eastern Christianity on the territory of Poland – both experiencing a dramatic tear since the 11th century.

Cultural results of the Union contributed to the deepening of Europeanization of the Polish culture, which was developing in a lively and intense dialogue. Religious, national and linguistic pluralism - conceived in the Catholic womb - has become a common experience of Poles, Jews, Germans, Tatars, Lithuanians, Ukrainians, Armenians, and other nationalities on a scale not seen in any other part of contemporary Europe.

Indeed, it was this very tradition of awareness among people in Europe of the Christian foundations of the place they live – which has been partially lost and truncated as a result of secularization in the second half of the 20th century, and in the communist countries systematically destroyed by the atheistic state - that John Paul II considered as an important, and indispensable factor to recover the cultural identity of Europe.

When the Pope finished the famous Mass in Warsaw on June 2, 1979 by praying for the “renewal of the face of the earth,” most certainly he had in mind the liberation of Poland from the communist totalitarianism - perceiving it as the greatest threat to human dignity and national sovereignty – as well as in the broader sense, he made this prayer for the whole Europe, which in his opinion, was losing the memory and continuity of its Christian roots.

Nowadays, when tensions between tradition and modernity are very high, this years’ anniversary of Poland’s baptism assures me on the perils of thinking that the only way to be free is to embrace the modernity, and at the same time reject the tradition.

Being aware of our great Christian tradition, as well as our difficult past, I am in full agreement with the Polish Pope that living “as if God did not exist” leads to religious indifference, which makes God the “great absence” in the midst of human affairs, and violates a man’s own freedom, as he should not yield under any ideological and cultural pressure.

It means the Christianity has only a value if it is a conscious choice, supported by a critical reflection on its purpose and meaning.

1050th anniversary of the Baptism of Poland