All flags flying at the Last Night of the Proms 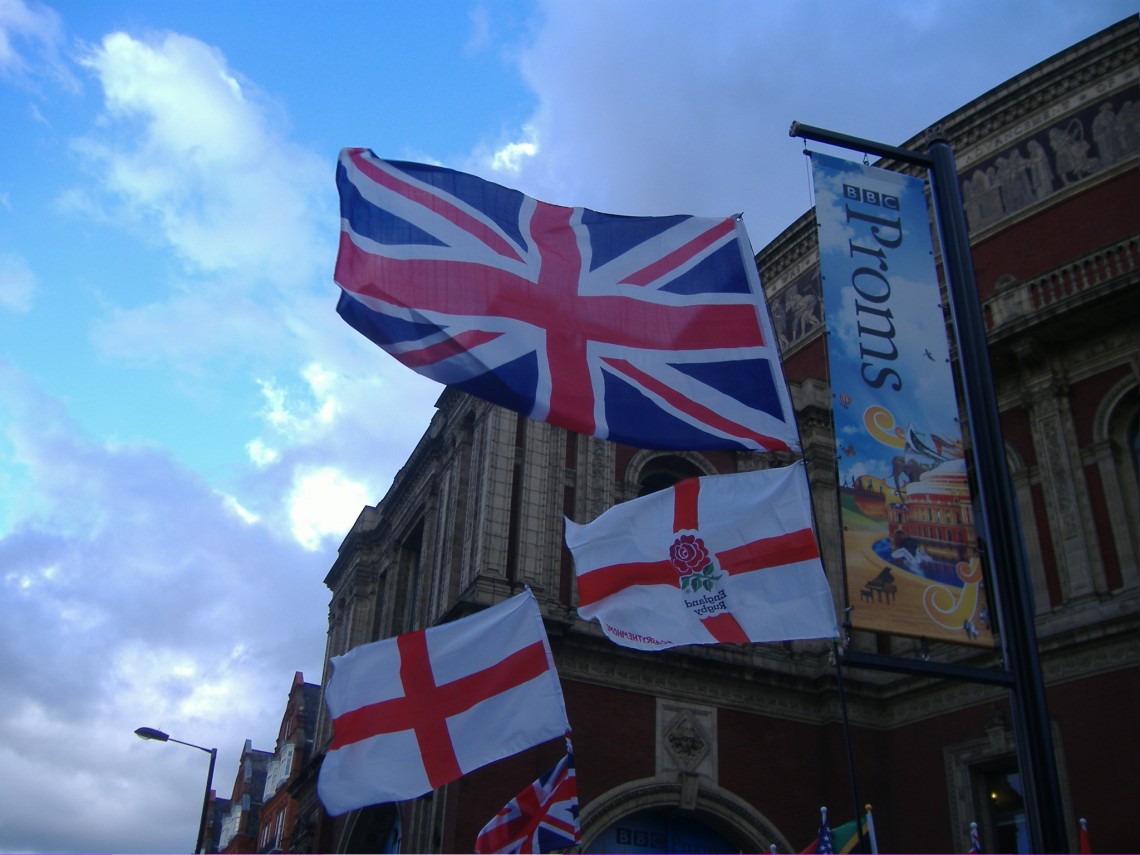 All flags flying at the Last Night of the Proms - preceded by Russian masterpieces from St. Petersburg, and the visionary majesty of The Dream of Gerontius. Stuart Millson enjoys the last week of the 2015 season of Henry Wood Proms.

Stuart Millson enjoys the last week of the 2015 season of Henry Wood Proms.

This piece first appeared in The Quarterly Review.

‘There is no sound quite like it anywhere else in the world. A chorus of over seven thousand voices, all standing up and letting their lungs fill the vast spaces of the Royal Albert Hall…. In mid-September, in the second half of the Last Night of the Proms, and partway through Elgar’s orchestral Pomp and Circumstance March No. 1, the whole audience rises to its feet to sing Land of Hope and Glory to that great tune in the middle… For a few brief moments, in that brilliant throng, sweltering in motley dress and waving banners under the hot television lights, it feels very good to be alive, and especially good to be in England.”

- Barrie Hall, The Proms and the men who made them (George Allen & Unwin).

Writer, Proms enthusiast and Head of Radio 3 publicity from 1970 to 1980, Barrie Hall published (in 1981) a “breezy” and very personal history of the great concert series, established 121 years ago by Sir Henry Wood (with a little practical help from the concert promoter, Robert Newman). His account of the Last Night - from the era of conductors such as Sir Charles Groves, Norman Del Mar and James Loughran still rings true, although in present times, the formula for this unique concert has changed somewhat. It was often said that Last Night was jingoistic and insubstantial, and various attempts were made to change the course of the finale - including the introduction of semi-serious audience participation works, such as Malcolm Williamson’s The Stone Wall (a fantasy of warring ancient British tribes). Today, a similar approach has been undertaken to broaden the community singing, but using instead the easy, familiar, not-strictly-classical melodies of (in 2014) the music from Mary Poppins, and this year, a medley from The Sound of Music. Pleasant, tuneful, good fun - but seemingly a world away from Eleanor Alberga’s (cultural) call to arms at the opening of the Prom: her newly-commissioned mantra for chorus, Arise, Athena!

For Proms Director, Edward Blakeman - the architect of a very fine Proms season indeed - the need to challenge preconceptions and “defy categories” of music is paramount, if more people are to be drawn into classical music. His aim is quite right: we have to reach out, to a generation of younger people - deprived of classical music, ignorant of the names Haydn, Beethoven, Wagner, Elgar, and - in so many state secondary schools - hardly educated in any form of music, or poetry or the arts at all. However, we must also be aware that categories, just like national borders, need not be exclusive, forbidding “barbed-wire” things, keeping people out. Categories can and do provide useful definition - something to aspire to, something which gives meaning and integrity. So it was very absorbing on the Last Night to hear, in the first half, Shostakovich’s Second Piano Concerto, performed with complete elan by the BBC Symphony Orchestra, directed by returning Last Night conductor, the American Marin Alsop (one of the world’s few women conductors, the first woman to conduct the Last Night of the Proms, and an artist of forthright views - with possibly a slight tendency to overstate her case in relation to gender equality in classical music as a whole). Benjamin Grosvenor was the eloquent, bold and brilliant soloist - a strikingly youthful figure, and an example to the young to follow classical music and the arts. Of all the pieces in this final programme of the season, the Shostakovich - dating from 1957 - made the most incisive impact, with the BBC SO giving as good a performance on this out-of-the-ordinary night as they did during the last chapter of August’s Sibelius cycle, in which they tackled the last three of Finland’s greatest symphonies. The witty (it is often said, “pungent” and prickly) themes of the first movement make way in movement number two for a heartachingly noble and tragic theme, one of Shostakovich’s great achievements - and a passage which seems to me to encapsulate a mood of suffering (the suffering, sorrow and endurance of a people) and all the emptiness and vastness of the landscape, steppes and wastes of Russia.

The presence of the Shostakovich reminded me of the inclusion on the 1983 Last Night programme of Szymanowski’s Symphony No. 3 The Song of the Night - a mysterious and intoxicating work (proof of the evening’s unjingoistic tendencies) and a serious prelude to the uplifting music which, traditionally, ends this concert and gives us that sense of belonging which so inspired Barrie Hall in 1981.

The previous evening, the Vienna Philharmonic performed Elgar’s The Dream of Gerontius, under the baton of Sir Simon Rattle - the much-loved and admired conductor of the Berlin Philharmonic Orchestra, who has scaled the heights of classical music from his time as a first-rate “apprentice” of the BBC Scottish Symphony Orchestra, and then, the reshaper in the 1980s and ‘90s of the City of Birmingham Symphony Orchestra. Sir Simon brought something of an operatic feel to Gerontius - his soloist, Magdalena Kozena (mezzo soprano) bringing an intensity and tension to the role of the Angel - and I began to wonder how this British oratorio would look as a semi-staged work. Roderick Williams - Priest and Angel of the Agony - was seated at the edge of the orchestra, and rose from the (conductor’s) right of the platform to join in the drama. J.S. Bach’s Passions have been rethought and restaged by Rattle and Kozena: would Elgar’s great statement of fervour and faith lend itself to a similar treatment?

The influence of Wagner is also inescapable in The Dream of Gerontius - the opening (also associated with Ken Russell’s film of the Malvern Hills with the Crucifixion superimposed upon their ridges) feeling very much like the twilight, atmosphere of the Parsifal prelude. The Wagnerian Vienna Philharmonic generated a deeply-mellow, English, valedictory cello tone - with noble horns and austere brass writing underlining, not just the romanticism of Elgar’s native landscape, but a powerful sense of his natural place alongside the 19th-century romantic masters of the continent. At certain moments - such as the soft, almost whispered chorus of the Assistants, we were almost taken into the world of Choral Evensong - or the English church tradition of Tomkins or Byrd:

‘…Job from all the multiform and fell distress (Amen); Moses from the land of bondage and despair (Amen)…’

- words sighing and drifting into space.

Interestingly, for this performance (a work all about death and the elderly figure of Gerontius), the vocal force deployed was the BBC Proms Youth Chorus, and it certainly made a difference to hear the massed voices of the emerging generation - somehow softer, with exact and impressive articulation, and an “alive”, broad, resounding tone. In the great chorus - Praise to the Holiest in the height - they scythed through any acoustic fuzziness which the Royal Albert Hall might reveal, with no sense of being overwhelmed by the stage and the space - and the Vienna Philharmonic. With the great organ notes surging through, underpinning and anchoring their singing, this was an Elgar performance of great virtue and solemnity, and not one that will be forgotten.

It seems irrelevant in some ways for me to mention that I was not always quite at one with Sir Simon’s determined performance. For this reviewer, the slower, unfolding, more self-consciously majestic approach of Sir Adrian Boult (his bearing and moustache very similar to Elgar’s) had more of the essence of Gerontius. And I felt that Rattle tended to enjoy the energy and disarray of the Demons’ Chorus, more than the pastoral, visionary, “Nimrod” side of the work - which was no disadvantage, as the demonic possession of this episode deserves the most audacious treatment. Without doubt (and the Last Night aside) a satisfying end to the summer at the Royal Albert Hall - giving everyone much to talk about at the capacity-audience BBC press party afterwards.

At the beginning of the week, the St. Petersburg Philharmonic Orchestra under Yuri Temirkanov provided an evening of shimmering Russian magic, in the form of Nikolay Rimsky-Korsakov’s Scheherazade - a symphonic suite from 1888 steeped in orientalism, swashbuckling myth, the exploits of Sinbad, and the romance of the Kalendar Prince (the noble scion of a wandering race from the depths of Central Asia). Temirkanov also brought the Rachmaninov Second Piano Concerto (soloist, Nikolai Lugansky played with breathtaking style and command), and the lesser-known, Dante-inspired Tchaikovsky work, Francesca da Rimini - both of which brought to mind the sort of older Proms programme associated, perhaps, with the years of Sir Malcolm Sargent. The St. Petersburg orchestra played extremely well - in a very full-bodied, exciting manner - and although I did not feel that the audience had been given a unique performance, we nevertheless heard an ensemble in repertoire that fitted it like a glove. On “home soil”, on their ground, in their music, the Russians sounded and gave their best.

As Elgar’s orchestration of Parry’s Jerusalem, the ancestral Auld Lang Syne, and Britten’s arrangement of God Save the Queen gave their curtain call to summer, we can truly say: this was a great season for the Proms. But then again… we tend to say that every year.

Stuart Millson is the Classical Music Editor of The Quarterly Review.

Last Night of the Proms