BOOK REVIEW: Here and Now: Some thoughts about the world and how we find it – Peter King (Arktos 2015) 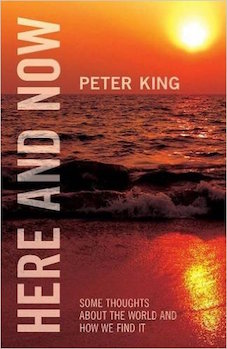 “To be antimodern is to accept the idea of now, not as the postmodernists do, as a proof of contingency, but as recognition that we are where we should be, that we are home.  Now is where we are and not a prediction.  It is a certainty, not a contingent possibility.  It is a safe bet and not a promise.” (p.37)

This book is a statement of the antimodern condition.  That instinct that dwells in the souls of all genuine conservatives which embraces certainty over speculation, stoicism over progress, and the love of home over modernity’s constant need for flux and change.  It is also a statement of profound dissatisfaction with the modern world as it is.  Not as it is in its essence, and the way in which it presents to us as thinking and feeling subjects, but as it is in its seemingly unending journey to some supposedly brighter yet unspecified future, who knows where, and who knows when.

What this book is most certainly not is a description of antimodern ideology.  There is no radical plan, no carefully thought out theory elucidated stage by stage, and no tub-thumping polemic, loudly proclaimed from the gantry.  Instead, it reflects a strand of English conservatism that is dispositional rather than ideological, quiet rather than strident, reflective rather than idealistic.  The emphasis is on antimodernism as a disposition, a certain way of looking at the world in which we find ourselves.  The antimodern condition is an attitude and not a certain set of ideas of greater or lesser specificity.  This way of describing antimodern thought was also relflected in the byline of the title of Dr King,s preceding volume to this book: “Keeping Things Close: Thoughts on the Conservative Disposition”.

Therefore rather than a long work of turgid political philosophy, the book is divided into a set of “short essays and easy speculations”, any of which can be read in isolation from the others.  There are certain themes that recur, approached several times from different angles, and re-stated in different terms.  There is a refreshing absence of theory.  The book is more a set of concerns, circling around one central idea that is beguilingly simple: we are where we are and that is the end of it.  What we have we should cherish, precisely because we are home.

One of the key themes is precisely this love of home, something that Roger Scruton developed in possibly his most important contribution to conservative thought: Green Philosophy.  Scruton makes much of the Greek word oikophilia, whereas Dr King does not delve into classical roots, preferring instead to reflect on what this means for us as beings who dwell.  For him, the key conservative insight is that we are located beings who have a natural affinity to what we already know (p.19).  We do not readily accept change as a norm, preferring instead to put down roots; embracing our traditions and customs, and those whom we love.  Indeed, Dr King feels that the unfortunate linguistic connotations of oikophilia (is it a love of “oiks”?) actually do a disservice to the elucidation of the idea itself, and give the impression of its proponents as aggressive and uppity.  Personally I am not so sure this is a very genuine problem, and it is a curious observation in itself, but it is a shame that the opportunity to reveal what the Greek roots of a love of home could have taught us about our antimodern disposition was passed up.  However, the central contrast between antimodernism and modernity throughout is stasis, roots and dwelling on the one hand, and speed, flux and consumption on the other.

Dr King draws on various sources for intellectual inspiration, but the influence of René Guénon is the most apparent.  Although not generally thought of as a primarily political thinker, Guénon is important for politics and for understanding the crisis at the heart of the modern world.  He emphasised the sacred and traditional over the political, suppressing the importance of action, especially for its own sake.  What was important for Guénon was knowledge and especially intuition, which comes from a source higher than man.  In this way we can see the essential godless quality of modernity, and its obsession with empiricism and purely rationalist ways of thinking, as opposed to the world of tradition, where we connect with what is transcendent through higher forms of knowledge than the merely rational.  Guénon himself drew on many diverse sources, particularly Chinese and Hindu thought, and later in life became a Sufi Muslim.  However, he sought to preserve the uniqueness of cultures, and preached orthodoxy and tradition to the extent that he rejected what came about after the Protestant reformation, affirming Protestantism to be outside of tradition.  Therefore it seems a little puzzling that given this influence, Dr King would seem to deny the uniqueness of Western civilisation, asserting that it is based on “absorbing and assimilating” (p.  23), more on which, below.

As antimodernists, traditionalists or conservatives we are above all complacent.  Indeed, Dr King seems to think that is a key virtue and it is emphasised as a positive on more than one occasion.  The negative connotations of complacency are clear, and I think that utilising this word as a description of our attitude as any of the above three positions is a weak point in his argument.  Indeed, in one section entitled “The problem of fighting back” (p.21) Dr King lists several ways in which actively engaging to preserve our traditions, customs and civilisation is a modernist conceit, and therefore not something to be encouraged.  It is curious that on the one hand he asserts that we are prepared to die for our home because it gives us a purpose for living, but on the other puts roadblocks in our way when we need to turn our attention to the enemies of our culture and traditions.  One is not expecting to find in this book a step-by-step guide on how to defend Western civilisation, but the idea that we should be complacent, even in the face of the obvious threats we face here in Europe is frankly, slightly bizarre.

Another point at which one feels there is somewhat of a failure of nerve is the issue of race.  In the section entitled “Who cares about race” (p.22-23) there is what can only be described as an exercise in furious counter-signalling against anything that would appear to endorse race as a physical reality.  Scruton is again employed, this time to demonstrate that civilisations are often mixtures of each other, and assimilate influences that are considered to be foreign.  This is all well and good, but we can still talk of an essence of each civilisation, something like the majority area in a Venn diagram, or else we cannot speak of civilisation at all, Western or otherwise.  And civilisations are what they are because of the uniqueness of the people who create them; their values and character.  Dr King even seems to contradict himself when he uses the idiom “our ancestors”.  What does he think this means?  It means our ancestral line; our people; our race.  This is something which is notable in the work of many genuinely conservative authors, including Scruton; that as soon as the idea of race is mentioned a wall comes down, and they will have none of it.  It would not be fair to describe this as disingenuous or intellectual dishonesty but one cannot help but feel that a slightly cynical interpretation of this attitude is unavoidable.  After all, one needs to keep one’s job and feed one’s family, and if there is anything liberal modernity abhors it is an honest discussion of race.  People have lost their jobs over less.

Dr King tends to use the words tradition, antimodern and conservative (and their derivatives) inter-changeably.  However, I do wonder how much of a traditionalist he really is.  In the essay entitled “Who am I to say?” (p.77-79) there is a discussion of ­The Book of Common Prayer and its gradual replacement by the Church of England with a more modern liturgy.  I commend to anyone interested the presentation given at the 2015 Traditional Britain Conference by The Revd. Peter Mullen on this exact subject, as it is very illuminating on the practice of replacing the beautiful liturgical language of the prayer book with trite modern idioms, such as the description of Jesus sitting down to ‘supper with his friends’.  Dr King appears to attach no importance to a “form of words” and merely expresses platitudes about the church being about “worshipping God”, no matter how or where.  I think many people who value the BoCP will be offended here.  There can be no doubt it is a beautiful liturgical work without parallel in the Western world that has endured since Cranmer in 1549.  Is he seriously suggesting we should just junk it?  Isn’t conservatism about conserving things?  The institutions that we value as traditionalists?  If we accept the rejection of the prayer book of all things it really is the thin end of the wedge.  It is akin to saying that it need not matter if we no longer read and perform Shakespeare, so long as we are reading and performing something.  He then goes on to reference Pope Francis, who on being asked about the practice of homosexuality gave the reply that is the title of this section of the book.  Dr King sees this as “getting to the very core of our faith” (p. 78).  I think many Roman Catholics would have been horrified by Pope Francis’ utter dereliction and ignorance in the face of centuries of teaching of the RC church on this subject.  Dr King’s interpretation is that the pontiff was simply saying that the church and our faith will remain after he is gone.  I think that involves a huge leap of the imagination when most Catholics will hear the Pope’s words for what they are; an act of gross virtue signalling and a desperate desire to be seen as “progressive”.

However, despite these negatives, there is much to commend here.  In particular, the lingering discussion of the concept of dwelling on pages 90-95 is illuminating.  Citing Martin Heidegger’s essay ‘Building, Dwelling, Thinking’, Dr King equates dwelling with human settlement.  Pace Heidegger, dwelling is humanity’s ‘being on the earth’, right from the ground up to the nation itself.  We dwell as individuals, families and nations.  We create permanent and reliable social and political institutions to reinforce our being here.  But there is more.  In a particularly beautiful turn of phrase, dwelling is where “ordinary quotidian habits link to mystery” (p. 91).  When we are in place in the act of dwelling we join with something larger than ourselves.  We give the world meaning through our occupation of it and somehow re-capture our love of God.

I would recommend reading this book alongside, or immediately after the preceding volume: Keeping Things Close: Essays on the Conservative Disposition (both published by Arktos).  Taken together they constitute a comprehensive description of the antimodern condition, and how to live in an increasingly alien and bewildering world, still beset by the crisis of modernity.