Civilisational Success, and its Dangers

Innovation, broadly defined in economic terms as: improved efficiency through greater output attained with the same amount of resources - is conventionally seen as a unqualified ‘good’. This is an incomplete definition, but this, rather than the inventive method which creates entirely new entities, is the prescient part of this article. Indeed, it is often touted as the primary benefit of the free market to promote such innovation. Less commonly discussed are the parallels of this idea in the cultural sphere. This interaction will take a similar form, but let us distinguish it like this: a cultural innovation is one which allows for the same level of utility or satisfaction to be obtained from a smaller input. This may appear to be true also in the case of economic innovation, but this distinction is made in the case of cultural innovation because of the seemingly universal (at a population level at least) desire for comfort, and effort minimisation. A frequent example of this may be the delegation of policing or defence duties to a dedicated body, rather than handling the matter locally, thus generating the typical economic benefits of specialisation and division of labour. Simply by using this example, some of the issues to be discussed may become clear, but considering the delegation of such matters are not usually conducted in quite that fashion, another may be useful. Over time we have become accustomed to a certain level, and a certain kind of nutrition. The benefits of this have been a general increase of welfare, as well as physical and mental improvements which have improved our lifespans, intelligence, vitality and health. When we are put into situations where these expectations cannot be met, therefore, we have more difficulty in operating. Larger bodies require more sustenance, and accustomed minds will resent the lack, such that men thrust into either the jungle, or desert in wartime will require more logistical support to achieve the same level of effectiveness. Not only this, but there is a perfectly logical tendency to tame the inhabited landscape over time, either through urbanisation, or domestication of the countryside into an easily workable form such as the English countryside. Both of these measures are perfectly reasonable developments, particularly because stable peacetime - where most of the benefits, and the fewest number of drawbacks to these innovations are felt - is most of time for most people. Yet, when war comes, and these propensities are challenged by circumstance, the hardier people will gain a great advantage.
So even if we were to accept this as true, what would be the consequence? Well it might go someway to explaining why civilisations can appear to collapse so quickly, particularly in relation to their slow growth. Likewise why there is a persistent concept of moral degeneration preceding a collapse. Hard work and little leisure time are necessary for a poverty stricken people, but as society develops the possibility of allowing a greater number of people to enjoy more leisure, and less work, then resisting this development will prove incredibly difficult. But in the wake of this first case, a precedent will be set, that will strengthen the argument of any who would champion yet further leisure. As this continues, however, the expectations raise with it, such that any suggested reductions, even to the same previously enjoyed level, will be considered disastrous, and avoided at all costs. When this tendency is set in stone, literally in many cases by the movement of peoples both geographically and between trades, the consequences are even more keenly felt if the supply is disrupted. During the earlier years of Rome, the city’s grain supply was amply managed by the countryside in its own proximity. But as the city grew, and new territories were added, areas more and more further afield were enlisted to fulfil the task. And why should they not? Rome was less fertile than Sicily, and the North African coast around Carthage more fertile still. It is perfectly logical, then, to supply Rome’s capital, notably the grain dole, using North African yields. The price will be low, because the yields are high, and stability will be maintained among a potentially rowdy and growing population. Yet doing so opens up the method by which Rome might be brought to its knees, as the loss of North Africa, and its reconquest marked one of the defining objectives of a Western Roman empire on its last legs. For letting it remain outside of Rome’s control would be a consignment to the whims of the new occupier as a result of being so reliant on their trade, or a major economic and lifestyle shift from a nearly 600 year status quo. Though it must be noted that this was not the inciting incident of Western Rome’s final dissolution. That beginning can be more conceivably ascribed to when Alaric’s visigothic army numbering fewer than Hannibal’s after Cannae, faced a city which was much larger, and had not suffered an immediate prior catastrophe such as that of Cannae, yet Alaric sacked Rome, where Hannibal had not dared to begin a siege. A consequence of Roman outsourcing of the military for centuries, perhaps? 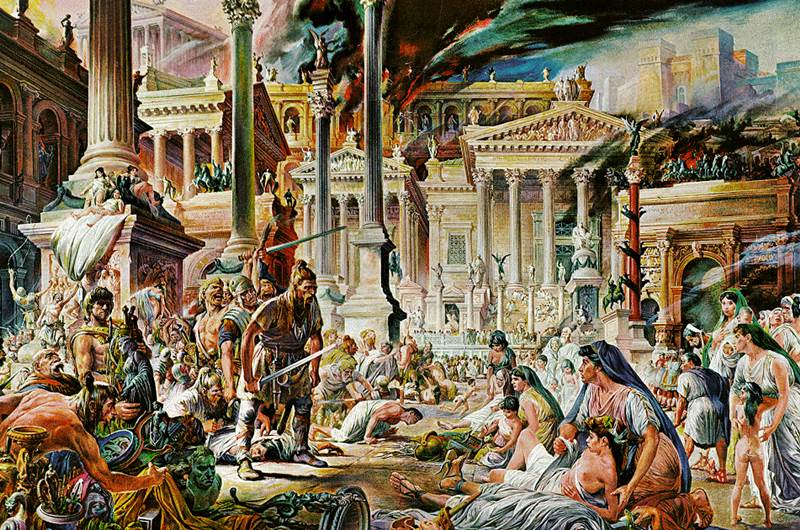