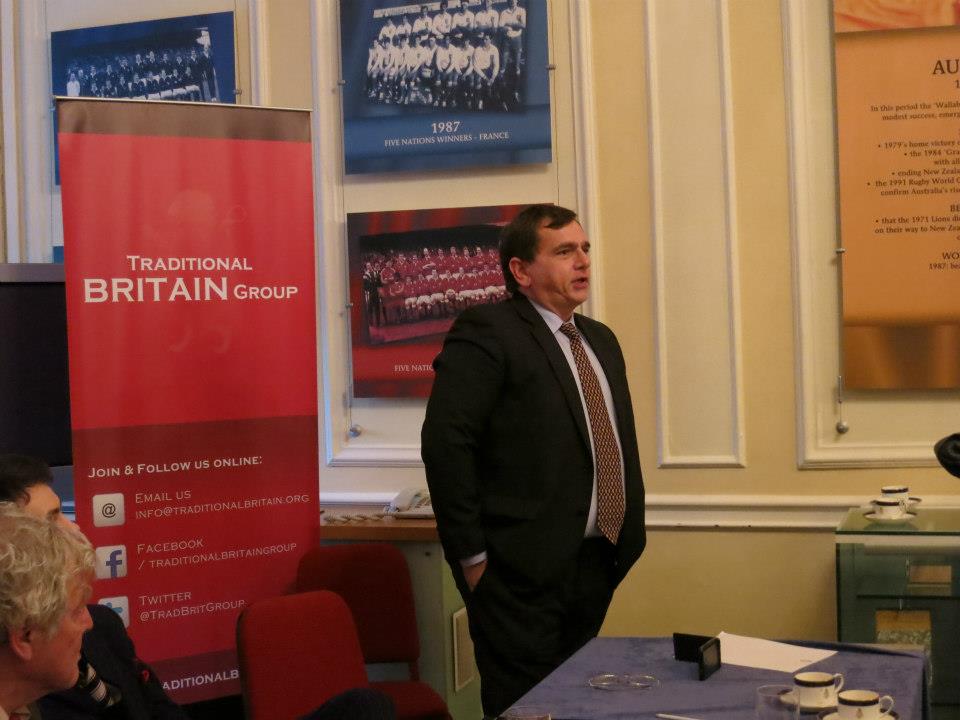 Talk given by Sean Gabb to the Traditional Britain Conference in 2012.

We know that England is under attack, and from its own ruling class. Before we can speak of defense, we need to understand the reasons for the attack.

This is not an attack on tradition in itself, but the unfolding of an alternative tradition.

The English people in 1914 were capable of fully democratic self-government. They had the necessary cultural and genetic cohesiveness for a democratic system not to descend into chaos or majoritarian tyranny.

Democracy, however, was not necessary, as the oligarchy of hereditary landlords who ruled England had absolutely identified itself with the nation. Every interest group had its place within the nation, and there was a place for all.

After 1914, the old ruling class was destroyed—the heavy casualties of both World Wars, high taxes on static wealth, demands for a fraudulent kind of democracy, and so forth. The old ruling class went down before all this, because it never tried to evade the duties that came with national identification.

The new ruling class is a coalition of politicians, bureaucrats, educators, lawyers, media people, and associated business interests that draws income and status from an enlarged and activist state. It does not own the means of production but is content merely to control them. Its general desire is to avoid the entanglements that destroyed the old ruling class. It wishes to avoid more than token identification with the English people at large.

The present—and so far the most successful—scheme of liberation is to make power opaque and unaccountable by shifting it upwards to various multinational treaty organizations—e.g., the EU, WTO, NATO, etc.—and to Balkanize England into groupings more suspicious of each other than willing to combine against the ruling class.

State-sponsored mass immigration has been the most obvious evidence of this desire. Filling the country with people of different colors and with different ways, which do not like each other, and do not like and are not liked by the natives, is ideal Balkanization. But one of the purposes of political correctness is also to divide the native population—women against men, homosexuals against Christians, and so forth.

The final desire is for the mass of ordinary people to be dispossessed and impoverished and unable to challenge structures of exploitation that channel fantastic wealth to a free-floating class of masters.

If we want to avoid this, we must destroy the ruling class now. Its weakness is its reliance on the state as source or enabler of its income. Conservatives, therefore, must seize control of the state and disestablish the ruling class.

If we want to win the battle for this country, we need to take advice from the Marxists. These are people whose ends were evil where not impossible. But they were experts in the means to their ends. They knew more than we have ever thought about the seizure and retention of power. If, therefore, we ever achieve a government of conservatives and seek to bring about the irreversible transfer of power to ordinary people, we should take to heart what Marx said in 1871 after the failure of the Paris Commune:

…the next attempt of the French Revolution will be no longer, as before, to transfer the bureaucratic-military machine from one hand to another, but to smash it, and this is the precondition for every real people’s revolution….

On the first day of our government of conservatives, we should close down the BBC. We should take it off the air. We should disclaim its copyrights. We should throw all its staff into the street and cancel their pensions. We should not try to privatize the BBC. This would simply be to transfer the voice of our enemy from the public to the private sector, where it might be more effective in its opposition. We must shut it down—and shut it down at once.

We should do the same with much of the administration. The Foreign Office, much of the Home Office, the Commission for Racial Equality, or whatever it is now called, anything to do with health and safety and planning and child protection—I mean much of the public sector—these should be shut down.

Let me emphasize that the purpose of these cuts would not be to save money for the taxpayers or lift an immense weight of bureaucracy from their backs—though they would do this. The purpose is to destroy the ruling class before it can destroy us. We must tear up the web of power and personal connections that make these people effective as an opposition to radical change. If we do this, we shall face no more clamor than if we moved slowly and halfheartedly.

One obvious sign of success will be when depensioned enemies like Neil Kinnock and Peter Mandelson are seen serving on the cheese counter in Sainsbury.

Turning, however, to formally private business, much of this currently supports the ruling-class project and is little more than the economic wing of the ruling class. We should respond to this by removing privileges like limited liability and forcing all business to internalize their transaction costs. Big business must be ruthlessly stripped of its privileges and made to sink or swim in fully liberated markets.

Following from this, however, we should leave large areas of the welfare state alone. It is regrettable, but most people in this country do like the idea of healthcare free at the point of use, and of free education, and of pensions and unemployment benefit. These must go in the long term. But they must be retained in the short term to maintain electoral support. Their cost and methods of provision should be examined. But cutting welfare provision would be politically unwise in the early days of our revolution….

I have not touched on the constitutional arrangements of a restored England. But I must tell you that these will often need to be different from those we have lost, and that organizations like Traditional Britain still celebrate. We shall need to create new structures of power and new safeguards against abuse of that power. The new order of things will restore the spirit of the old but cannot be a simple recreation.

Now, one final warning. What I recommend is a revolution—perhaps a counterrevolution, but still a radical break with the present order of things. The problem with all such recommendations is that the extent of present evils is greatly magnified, and the risks of change are minimized. It may be, however, that there is some hidden wisdom in the present order of things that we have overlooked. Or it may be that what we have is the least of available evils. I do not think this is the case. But I feel obliged to mention it. Conservatives, after all, should not wish to copy the mistakes of the French revolutionaries.

Is there a future for Tradition?