Desecration at Saint-Denis: A Narrative of Lies 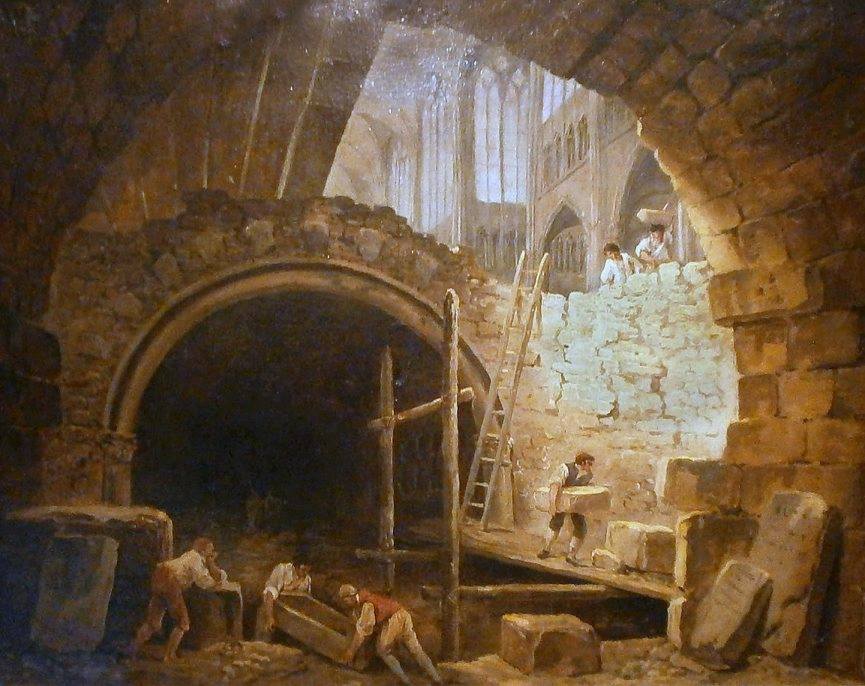 Darius Guppy surveys the wasteland of France's banlieues and compares them to the ancien regime glory of St Denis Basilica and the France of forty kings.

Just off the A86 north of Paris in a run-down neighbourhood typical of the capital’s banlieus, where once stretched beautiful fields, the driver will make out the green copper roof of a Gothic masterpiece, considered the first example of such architecture; a Basilica for most of its existence, recently imparted the status of Cathedral: Saint-Denis.

Having parked your car wisely, for the area is a rough one, and made your way through streets of litter, French rap and shalvar kamizes you will come upon a small square and from there to a sign at the foot of the Cathedral’s front steps which informs you that inside are to be found the remains of all but three of the monarchs of Europe’s greatest nation, for this was their traditional burial place for twelve centuries. Names include Dagobert, Clovis, Francois the First and Catherine of Medici. The remains of Louis XVI and Marie Antoinette, dumped in the churchyard of the Madeleine and covered in quicklime after their beheading, discovered over twenty years later on the orders of Louis XVIII, were finally laid to rest in the Cathedral’s crypt in 1815.

But the sign forgets an event far more powerful on the symbolic and psychic levels than the storming of the Bastille or the decapitation of Louis and his Queen; a crime which, while it cannot be denied and written completely out of the history books, remains occulted.

Into the Cathedral and the peace behind its doors; behold the vaulted roof and stained glass windows through which heaven was brought to earth. But now you sense disturbance, the unhappiness of order turned upon its head. At first, only the tap-tap of your steps to the back of the building where perfect marble effigies display tidiness and beauty; rows of them in sleeping prayer; but then that space between your mind and your heart which swirls into the other world whispers that beneath the neatly sewn plastic some great scar has been concealed. Your senses do not deceive you, for no bones lie beneath these pale effigies.

In October 1793, the desecration of the royal tombs at Saint-Denis proceeded at the instigation of the Committee of Public Safety. The vaults were broken open with hammer and axe. Henri IV’s tomb was the first. The great King’s body, completely intact, was displayed publicly in the choir at the foot of the altar for a couple of days, the gaping wound caused by his assassin’s dagger still visible, until a member of the mob pulled off his beard to keep as a souvenir, whereupon the corpse was thrown into one of two large trenches dug outside the building. Hugues Capet’s shoulder blade would, likewise, be kept as a memento. Over the next month France’s Kings and Queens followed, the lead of their coffins taken away to be melted into bullets for the revolutionary armies.

Louis XVI’s last testament, made shortly before his execution, provides a contrast:

“I pardon with all my heart those who made themselves my enemies, without my having given them cause, and I pray God to pardon them, as well as those who, through false or misunderstood zeal, did me much harm.”

Now, we were taught that before the Revolutionaries in France came along, armed with the ideas of the Enlightenment, man lived in darkness and that despite its undeniable excesses, the Revolution, by bringing us into the light was essentially a good thing for it introduced Democracy to the world and emancipated us all.

People are no freer nor any happier than they were before the Enlightenment and its embodiment, the Great Revolution. Supposedly liberated to ‘fulfill our potential’, only our ‘potential’ to produce and consume has been of interest. The banker or bourgeois politician is far more disconnected from the common man than anything envisaged in the grotesque parodies of Marie Antoinette. The places where Democracy flourished have been the most destructive, their higher living standards having been paid for by the immiseration of distant lands, an immiseration that continues through economic enslavement. By constructing a system that requires mad and wasteful consumption just to stand still, the environment itself strains. And the idea that we must work like slaves for the rest of our lives to pay off the roof over our heads but that we are somehow ‘free’ because every few years we can vote for one fool – or another fool – is insulting.

A narrative of lies has served nothing so well as big business. “Freedom” and “Democracy” are promoted only because such terms disguise how imprisoned we have become. Big business has no interest in you or me being ‘free.’ Its aim: for us to service our loans permanently, to be in a state of constant dissatisfaction so that we require the regular fix of spending and consuming to anaesthetise us, to become as obese as the philosophy which informs it and the inhabitants of the countries which champion it. Yes, we may win the lottery or design some ludicrously overvalued app and break free that way. But the dream is false. For where is the joy in freedom if all your friends are slaves?

When I travel through France’s historic villages, built by common folk rather than aristocrats, I know that I have been deceived. The Social misery that we are taught defined the world before the Revolution could never have generated such great culture. Peasants ground into misery by cruel noblemen do not build cathedrals like Chartres or produce fine tapestries, or cuisine or art or Bach. When a culture is healthy it yields that most wonderful of effects: Beauty. When it is sick and forlorn it spawns what we have now: ugliness, X-Factor, the disaster we call the Enlightenment.

So, after Saint-Denis, please visit the Louvre, Notre Dame and the countless other monuments that make Paris a jewel. None of them could have come about without Kings, a Church and a people who believed in them. If you want Democracy, then take a walk to the Pompidou Centre.

Inability to produce beauty constitutes the prevailing discourse’s greatest embarrassment and the liberal fantasy of unstoppable human ‘progress’ has required the Desecration’s occultation precisely because the Enlightenment project gets off to a very bad start indeed if the Revolution’s most significant symbolic event comprises an episode that would embarrass Jeffrey Dahmer. As for the meritocracy that was announced, one presumes the evidence to be merit. But I see no increase in excellence. Where today is Mozart? Where is anything within a million miles of him?

Wander round now and come upon the figures of Louis XVI and Marie Antoinette. Different. Not asleep but side by side on their knees in prayer. Of another order to the Blairs and Murdochs of this world. Those buried here knelt before God instead of admiring Him in the mirror and from this their legitimacy devolved. But why did the revolutionaries do these things? If they saw only a decadent King and his frivolous Austrian Queen then guillotine them. But dig up Dagobert? Jump from Regicide to Parricide?

Adolescent logic demanded it. The liberal looks forward, along a line, to unending improvement whereas his counterpart from the ancient and medieval worlds had turned his gaze back, to a Golden Homeric Age, an Eden before the Fall. And so the jettisoning of a pre-determined concept of “the Good”, what Aristotle describes as “Telos”, was required. God – the ultimate “Telos” - becomes the prime target; next, the greatest symbols of France’s history and repositories of her social capital: those buried here. Wipe out not a single Monarch therefore but the symbol itself and, with it, France’s past.

But to know who you are you need to know where you come from. The Revolutionaries took the where-we-come-from for granted, as have liberal thinkers ever since, and underestimated how much the rational man who they placed at the centre of their construct was rational precisely because he had been brought up on the Bible, conformed to mores in common with the other members of his community, had been instructed in the Classics and understood hierarchy even if he was frustrated that this hierarchy undervalued his own worth.

Those whose remains were defiled at Saint-Denis lived in a world that had appreciated for millennia how ‘the Good’ must be registered in eternity, perfect and unchangeable. Our ancestors may have differed, often murderously, as to where that Good is located but on one thing they were in complete agreement - it exists. Banish this view and Relativism triumphs: The Good now determined not by a notion of the eternal or the sacred but by a show of hands - whimsical and subject to manipulation - in the current context by media organisations and large corporations. To claim that Mozart is better than Madonna is to be elitist; beauty is not objective at all but purely in the eye of the beholder. Something is in vogue and thereby ‘legitimate’, the next minute not in vogue so illegitimate. Whereas, exactly as was believed before the advent of the Enlightenment, legitimacy has nothing to do with popularity.

A desperate hunt for surrogate Goods ensues: The Supreme Being, The General Will, The Rights of Man, Fascism, Communism and Economic Liberalism, in order of increasing destructiveness. Today politicians talk of “values”, in fact cherry-picking moral memories from an emptying well to create an illusion of structure and confused commentators refer to a “crisis of legitimacy”, conflating it with a “democratic deficit.” What they really mean is a crisis of authority. Telos vanishes and the people are programmed to become the opposite of what was supposed of them, unreasonable, without sense of society, capable only of moronic consumption and Democracy becomes, just as was foretold by the ancients, our worst enemy, taking on once again the pejorative meaning that has attached to it for the majority of its existence.

The Kings and Queens buried in this building were better than what replaced them. Let us therefore do what we came here for. The mass graves outside the cathedral were opened during the Restoration in 1817 but it was impossible to distinguish individuals among the mêlée of bones, fragments and body parts. So to pay our respects we must descend to the crypt where the ossuary houses the remains, now heaped together.

Reflect then upon how history, to borrow from Napoleon, is but the lies that are no longer disputed.