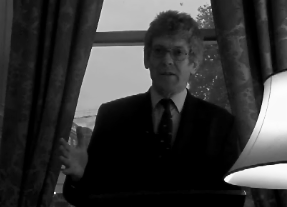 Gregory Lauder-Frost, Vice-President, presided and the main address was given by former SAS soldier, well-known academic and Russian expert, Dr. Frank Ellis, who gave a chilling vision of a Britain, fifty years from now, in which a fragmented country - besieged by mass-immigration - fights for survival.

"Newark, Norfolk, Kent - geographically, these places will exist. But will they be recognisable in any way to my parents' generation. Enoch Powell, one of the greatest politicians this country has ever produced, had the personal courage to warn us of national and cultural decline. When a nation, such as England, stops believing in itself, in its institutions and rooted identity, then it will slowly cease to exist as a meaningful society." Dr. Ellis went on to condemn today's politicians, who - unlike Churchill in 1940 - have been seduced by appeasement, the shallow lure and ideas of continental leaders, and the cult of globalism. "We have been delivered into foreign domination and control," said Dr. Ellis. The modern police - "politicised, politically-correct and no longer there to defend the public" - were also singled out by the speaker as an example of another English institution, subverted and debased. However, Dr. Ellis encouraged everyone present to "hold out" against the decay of the country, and to fight back for our civilisation, identity, independence and traditions. The sense of national cohesion, kindled by the recent Jubilee celebrations for Her Majesty the Queen, represented a sense that the nation still has life and spirit.

The evening ended with the reading of part of a speech of Enoch Powell's, in which our greatest post-war Conservative statesman looked back on a thousand years of England's history, and the legacy left to present generations by the Anglo-Saxons, Tudors and Elizabethans - a vision of a nation with its own sense of itself, its continuity and its exclusive national home.