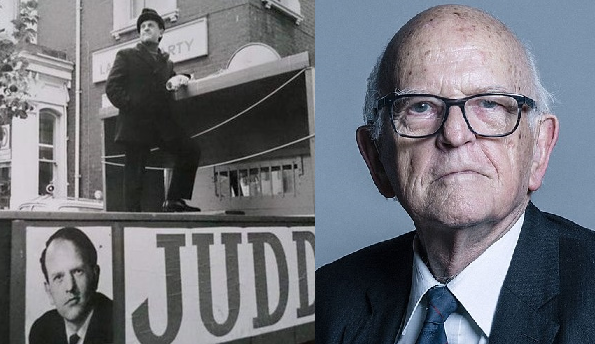 A classic example of the true enemy within, an international Marxist who would have been at home in the Soviet Union; a man who betrayed his own people and race, leaving over 5 million Europeans at the mercy of communist inspired savages

Frank Judd, international socialist and Labour Party MP and Minister died on 17th April 2021. His parents were solid London School of Economics socialists (where Judd also studied Sociology) and his mother was a prospective Labour parliamentary candidate.  Judd too studied sociology there and was president of the UN Student Association. In 1960 Judd became secretary-general of International Voluntary Services. He also chaired Freedom From Hunger’s youth committee. Elected an M.P. in 1966 he promoted a Bill to establish a Department of World Security supporting the United Nations.

He campaigned vigorously for an end to European rule in southern Africa. He repeatedly told Harold Wilson not to give ground to Rhodesia’s Prime Minister, Ian Douglas Smith, and sponsored a parliamentary motion to forestall a Rhodesia settlement reached during the Parliamentary recess. He urged British socialists to raise funds for terrorists in southern Africa, and was instrumental as Minister for the Royal Navy in forcing RN ships to stop using South African ports and in terminating the Simonstown Agreement. He protected the British Overseas Aid budget from cuts demanded by the IMF during Labour’s financial crisis. On other matters he refused to endorse M.P.’s calls for France to return home the recently discovered remains of King Henry V.

After losing his seat Judd became Associate Director of the International Defence Aid Fund for Southern Africa [terrorists]. He persuaded the wet Lord Soames, the last and imposed Governor of Rhodesia, to commute the death sentences of eleven African terrorists. A natural progression was when Judd became Director of the Left-wing charity Oxfam, where he was censured by the Charity Commissioners for advocating sanctions against South Africa, and called for pressure to be brought to bear against RENAMO guerrillas in Mozambique who were fighting the Soviet-backed Marxist terrorists there. Judd left Oxfam in 1991. Labour  then made him a Life Peer and continued using him in a number of roles. When Blair came to power Judd was sent as their member of the Council of Europe. At Westminster he served on the Joint Committee on Human Rights.

At various times he chaired the Far-Left Fabian Society, the centre for World Development Education, the International Council of Voluntary Agencies,  The Church of England’s Oxford Diocesan Board for Social Responsibility, International Alert, the Ruskin Foundation, and the World Economic Forum on the Future of South Africa.

Here is a classic example of the true enemy within, an international Marxist who would have been at home in the Soviet Union; a man who betrayed his own people and race, leaving over 5 million Europeans at the mercy of communist inspired savages, leading to tens of thousands of European deaths and dispossession.