Journey through an East Anglian county 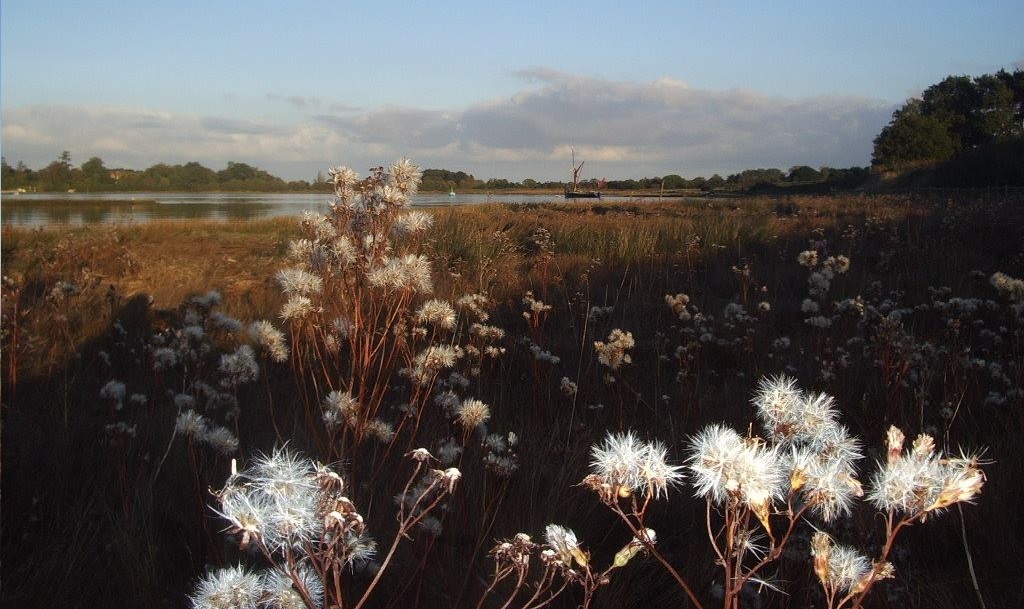 In the age of modernism and globalisation, Stuart Millson reminds us that there are still vestiges of old English life in Britain, and takes us on a journey through these mysterious, long-lost coasts and idyllic villages.

Suffolk is remote and pastoral, with a long coastline of mystery, shingle and wading birds. Old inns, too, beckon and a hundred villages offer interest and peace – and good real ale.

The A12 points the way to East Anglia, to Chelmsford, Colchester, and on to Suffolk; land of buried Saxon treasure, of Sutton Hoo and St. Edmund the Martyr, arable farming, Adnams and Greene King bitter, Aspalls cider, and sugar beet and sugar refineries. John Constable, one of England’s greatest artists was born here in 1776, and the 20th-century composer, Benjamin Britten – also a son of Suffolk – founded a festival here by the sea. Even the name of the region has an ancient folk-feel to it – Anglia – a name from antiquity, like Wessex or Mercia. The weather is often dry. The land is well-cultivated and agricultural. Tractors are everywhere, so are arable crops, and – intriguingly – vast pig-farms; there are small, fragrant cottage gardens and out-of-the-way spots of character, even eccentricity, in every conceivable part of the coast and country.

The landscape of Suffolk is largely low-lying, with gentle gradients (where there are gradients) and a long coastline that runs north-to-south, or south-to-north along the North Sea, or the German Ocean as it was once known. The coast has many mysteries – avocets and bitterns in the reeds and ponds of Minsmere; wartime and post-war structures on lonely Orford Ness; and all the solitude of the marsh and fenland at Iken and Snape. The sky is high and wide (it always seems this way when you are in marshland or by low-lying coast) – immense and rain-washed when a storm has briefly blown in, yet still and sunny for the dusty, windless summer months.

Despite a sense of being relatively cut off from modern civilisation, there are several large towns, Ipswich, Bury St. Edmunds, and the port of Felixstowe. Three centuries ago, Dunwich was one of the county’s great ports – until the North Sea washed it away forever. The coast seems so vulnerable – the shingle spits, dunes and small cliffs made of sandy soil seem as though they are waiting for the day when the sea will rise up and refashion the shape of the coastline.

But at Iken, a hamlet on a small inland estuarine lake of the River Alde, you feel protected from the storms of the North Sea. Near-silence reigns here: just the sound of the wind in the reed-beds, and the cry of the curlew – which pierces the moonlit night and tells of wildness, wilderness and tides. Iken was founded by St.Botolph – but his church was destroyed by Viking raiders. Yet the spirit of the place could not be extinguished by the flames and killing of the fierce Norsemen, and another church rose in its place – the forerunner of the mediaeval structure where the inhabitants of Iken worship today.

Suffolk, or at least the countryside of Suffolk, seems to exist happily in the world of half-a-century ago, when you really could leave your backdoor open and trust strangers to pay you for the home-made jam, or free-range eggs, which can sometimes be seen on little stalls outside local cottages. There is one such place for home-produce at Iken. Just place your coins, or your cheque in a tin!

Suffolk reveals many styles of building. The inland cottages of the county are known for their thatch, and for the soft pink colour of their walls. Nearer the coast, you will find weatherboarding. At Bungay, the buildings exhibit a Dutch or Flemish influence, but at Aldeburgh the town is straightforward, unfussy, solid and English. The Aldeburgh-born poet and rector, George Crabbe (1754-1832), caught the essence of the town in his work. It is a place built to withstand storms – a long line of shops and houses, like a row of infantry, with a Martello defensive tower at the southern end. Crabbe recorded the peculiarities of Aldeburgh life, and even celebrated its rough, wind-blown, sea-borne flora in a poem, entitled Marsh Flowers:

…Here on its wiry stem, in rigid bloom,

These with our seaweeds rolling up and down,

Form the contracted flora of our town.’

The sand-castle-like Martello fort of the town stands in character with some of the county’s remarkable pepper-pot tower churches; but others – such as those of Blythburgh, Lavenham or Orford – are stately and traditional, and everyone’s idea of what an English church should be.

Music is in the air in Suffolk. Benjamin Britten (1913-76) founded his festival of music at Aldeburgh – its great centrepiece of performance being the famous Snape Maltings. It is often said that the genius of Aldeburgh was its “subtle blend of the local and the international” – Schubert and Mahler songs; a symphony by the modernist, Oliver Knussen; Sibelius’s Tempest; and local folk tunes, arranged by the Festival’s creator, all played in the hall by the reeds and the river, with the stormy North Sea only a few miles away.

The influence of Britten’s festival radiated out from Snape. In 1969, the composer conducted Gustav Mahler’s Des knaben Wunderhorn song-cycle, derived from old German folk-poetry; and in 1961, the BBC recorded Britten conducting Mahler’s Fourth Symphony in Orford Church with the London Symphony Orchestra – a venue which also saw the first performance of Britten’s own Curlew River. The latter premiere is commemorated by a stone inscription in the church. Yet never far away from this musical sophistry are the folk-legends of Suffolk, and Orford itself: the legend of the “wild man” – a sort of bearded human sea-creature – who was caught up in a fisherman’s net; and tales of the smuggling gangs who shipped contraband and outwitted the revenue cutters in the 18th century. The wild man of Orford, by the way, can be found on the side of the church font – a fierce fellow, but now tamed and trapped in stone.

But Britten was not the only creative artist to be drawn to Suffolk. William Alwyn, symphonist, composer of film scores throughout the 1940s, and prolific writer for the orchestra generally, lived in the county with his wife, Mary – also a composer, except that she wrote under the name, Doreen Carwithen. The noble and gentle tunes of her Suffolk Suite capture the spirit of the landscape and people, and take us back to a more rural and comfortable world.

At Southwold, a different type of music to the ears may be heard! The pull of the pump at the bar, and the Adnams Brewery ale splashes into the pint glass. The famous Southwold lighthouse appears on the brewery’s labels and artwork, alongside representations of coastal scenes – and the famous 1672 naval encounter against the Dutch, the Battle of Sole Bay, which took place just out there on the waves, toward the near horizon. The sound of naval guns echoed here again in the Great War, when German shells thudded into the town – perhaps, along with the Zeppelin raids on London, the first-ever Blitz. Today, though, gentle peace reigns, apart from the beery voices and jollity in the pubs! Adnams is possibly the best known of the Suffolk brewers, but Greene King comes a close second, and there are also many smaller, micro-brewers to be found in the villages.

Although I cannot claim to have visited even a reasonable fraction of the public houses of Suffolk (a terrible admission for a former member of the Campaign for Real Ale), there is one inn which stands out particularly – not because it exists in a timewarp, or it is self-consciously old-fashioned, but simply for its comfort, its armchairs, coffee tables, oak tables, neat curtains and good food and beer. The landlady believes that her pub should be immaculate – and it is almost like a living room, or a quiet country hotel. Her enthusiasm is for a certain breed of dog, and so the pub is not “The Crown” or the “The King’s Arms”, but the Dobermann Inn. If you find yourself anywhere near the hamlet of Framsden, near Stowmarket, proceed at once to this oasis of civilisation. Aldeburgh and Snape have excellent watering holes, and there is a fine, old-fashioned bargemen’s bar on the River Orwell at Pin Mill – The Butt and Oyster, reputedly an inspiration to the author, Arthur Ransome. But the pleasure of a Suffolk pub crawl is to travel absent-mindedly among the unregarded villages, stumbling across little gems as you go, not really knowing where you are going.

Sometimes even just departing from one of the busy A-roads, such as the A14 can take you – in less than a mile – to village greens where blossom is falling and white geese square up to you, warning you to stay away, if you come too close to their goslings. The village green at Beyton is one of the largest you will see in Suffolk – more of a village field than anything. Trees dominate the scene – a pink snowstorm of blossom in spring; a woodland green canopy, almost, in summer. The rumble of lorries heading to and from Felixstowe along the main road is carried by the wind, but not always. The highway, with its unstoppable goods- traffic and impatient motorists, seems far away from Beyton’s “goose green” which, in early summer, has many delightful ducklings, goslings and fledglings.

But for the real-ale enthusiast who may be unconcerned by ornithology, Greene King bitter is served at The White Hart, and a pub quiz teams meet at The Bear, just at the edge of the village.

A couple of miles away from Beyton and you will find Woolpit, more of a small town than a village. The Victorian spire of the much older church is a tall local landmark, a needle rising in the distance above the sleepy agricultural land. Woolpit has a town centre, with quaint shops, a post office where people talk to one another in the small queue, a town museum and another good pub – The Bull, where darts and pub games leagues are advertised, and where the landlady pours you a sample of beer into a spirits or half-pint glass before make up your mind which brew to choose.

Suffolk is a county where the old rhythms of English life seem to prevail. They love their vintage cars and tractors here, and there is fine music to be enjoyed – as well as the natural music of the summer hedgerows – the blackbirds and yellowhammers which bring sweetness and sonority to the lanes, whose verges are adorned with lace-like cow parsley. This is the artistic and literary landscape of Constable and Crabbe – and on a fine day, with blossom on the bough, and perhaps the sound of Britten’s St. Edmundsbury Fanfare ringing in our ears, an almost Elizabethan “Merrie England”.  A beautiful region of East Anglia, and a county of rich treasures, and treasured memories.