Necessity of the Fourth Political Theory by Leonid Savin 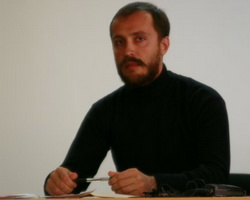 Leonid Savin, Fellow of the Centre of Conservative Research at Moscow State University, argues for the renunciation of (neo)Liberalism, and the revision of old political categories. He argues we should develop a new political ideology - The Fourth Political Theory - agreeing with Alain de Benoist, The French philosopher, for being right in remarking that the positive reconsideration of collective identity is necessary; for our foe is not “the other”, but an ideology which destroys all identities. Leonid sees the need for a Fourth Wave of globalisation: the re-establishment of (every) People with eternal values.

The present world financial crisis marks the conclusion of the damage done by the liberal ideology which, having appeared during the epoch of the Western Enlightenment, has for decades dominated most of the planet.

Disturbing voices and criticism started during the end of the last century, with the rise of such phenomena as globalisation and one-worldism. This criticism sounded not only from outside opponents – conservatives, Marxists and indigenous peoples- but started within the camp of the Western community. Researchers noticed that the modern shock of globalisation is a consequence of universal liberalism, which opposes any manifestation of distinctions. The ultimate program of liberalism is the annihilation of any distinctions. Hence, liberalism undermines not only cultural phenomena, but also the social organism itself. The logic of contemporary Western liberalism is that of the universal market devoid of any culture other than the production and consumption process.[1]

Historical experience has proved that the Western liberal world has tried to forcibly impose its will upon all others. According to this idea, all public systems of the Earth are variants of the Western – liberal - system[2] and their distinctive features should disappear before the approach of the conclusion of this world epoch.[3].

Jean Baudrillard also states that this is not a clash of civilisations, but an almost innate resistance between one universal homogeneous culture and those who resist this globalisation.[4].

Apart from liberalism two more ideologies are known for having tried to achieve world supremacy: Namely Communism (i.e. Marxism in its various aspects) and Fascism/National Socialism. As Alexander Gelyevich Dugin fairly notices, Fascism has arisen after the two ideologies and has disappeared before them. After the disintegration of the USSR the Marxism that was born in the 19th Century has been definitely discredited as well. Liberalism based mainly on individualism and an atomistic society, human rights and the State-leviathan described by Hobbes emerged because of bellum omnium contra omnes[5] and has long held on.

Here it is necessary to analyse the relation of the aforesaid ideologies in the contexts of the temporary times and loci from which they emerged.

We know that Marxism was a somewhat futuristic idea – Marxism prophesied the future victory of Communism at a time that nonetheless remained uncertain. In this regard it is a messianic doctrine, seeing the inevitability of its victory that would usher the culmination and end of the historical process. But Marx was a false prophet and the victory never eventuated.

National Socialism and Fascism on the contrary, tried to recreate the abundance of a mythic Golden Age, but with a modernist form[6]. Fascism and National Socialism were attempts to usher in a new time cycle, laying the basis for a new Civilisation in the aftermath of what was seen as a cultural decline and death of the Western Civilisation (thus most likely the idea of the Thousand-year Reich). This was abortive too.

Liberalism (like Marxism) proclaimed the end of history, most cogently described by Francis Fukuyama (the End of history and the last man)[7]. Such an end, nonetheless, never took place; and we have instead a nomadic-like “information society” composed of atomised egoist individuals,[8] that consume avidly the fruits of techno-culture. Moreover, tremendous economic collapses take place worldwide; violent conflicts occur (many local revolts, but also long-term wars on an international scale); and so disappointment dominates our world rather than the universal utopia promised in the name of “progress.”[9]

Fourth Political Theory and the Context of Time

How should the experts of the new fourth political theory frame their analyses in the context of historical time epochs? It should be the union with eternity about which conservative-revolutionary theorist Arthur Moeller van der Brück espoused in his book Das Dritte Reich.

If humans consider themselves and the people to which they belong not as momentary, temporal entities but in an ‘eternity perspective’, then they will be freed from the disastrous consequences of the liberal approach to human life, whereby human beings are considered from a strictly temporal viewpoint. If A. Moeller van der Brück’s premise is achieved, we shall have a new political theory the fruits of which will be simultaneously both conservative and bearing the new values that our world desperately needs.

From such an historical perspective, it is possible to understand the links between the emergence of an ideology within a particular historical epoch; or what has been called the zeitgeist or “spirit of the age.”

Fascism and National Socialism saw the foundations of history in the state (Fascism) or race (Hitlerian National socialism). For Marxism it was the working class and economic relations between classes. Liberalism on the other hand, sees history in terms of the atomised individual detached from a complex of cultural heritage and inter-social contact and communication. However, nobody considered as the subject of history the People as Being, with all the richness of intercultural links, traditions, ethnic features and worldview.

If we consider various alternatives, even nominally ‘socialist’ countries have adopted liberal mechanisms and patterns that exposed regions with a traditional way of life to accelerated transformation, deterioration and outright obliteration. The destruction of the peasantry, religion and family bonds by Marxism were manifestations of this disruption of traditional organic societies, whether in Maoist China or the USSR under Lenin and Trotsky.

This fundamental opposition to tradition embodied in both liberalism and Marxism can be understood by the method of historical analysis considered above: Marxism and liberalism both emerged from the same zeitgeist in the instance of these doctrines, from the spirit of money.[10]

Several attempts to create alternatives to neo-Liberalism are now visible – the Lebanese socialism of Jamaheria, the political Shiism in Iran where the main state goal is the acceleration of the arrival of the Mahdi and the revision of socialism in Latin America (reforms in Bolivia are especially indicative). These anti-Liberal responses, nonetheless, are limited within the borders of the relevant, single statehood.

Ancient Greece is the source of all three theories of political philosophy. It is important to understand that at the beginning of philosophical thought the Greeks considered the primary question of Being. However they risked obfuscation by the nuances of the most complicated relation between being and thinking, between pure being (Seyn) and its expression in existence (Seiende), between the human being (Dasein) and being in itself (Sein).[11]

Hence, the renunciation of (neo)Liberalism, and the revision of old categories and, perhaps, of the whole of Western Philosophy are necessary. We should develop a new political ideology that, according to Alain de Benoist, will be the New (Fourth) Nomos of the Earth. The French philosopher is right in remarking that the positive reconsideration of collective identity is necessary; for our foe is not “the other”, but an ideology which destroys all identities[12].

It is noteworthy that three waves of globalisation have been the corollaries of the aforementioned three political theories (Marxism, Fascism, and Liberalism). As a result, we need after it a new political theory, which would generate the Fourth Wave: the re-establishment of (every) People with its eternal values. And of course, after the necessary philosophical consideration, political action must proceed.

Leonid Savin is Head of Administration of the “International Eurasian Movement”; Editor-in-Chief of the “Geopolitics of postmodernism” internet media (www.geopolitica.ru); Senior Expert at the Centre of Geopolitical Research; and a Fellow of the Centre of Conservative Research, Faculty of Sociology, Moscow State University.

Replicated, with permission, from konservatizm.org