Reflections on the Riots 2011 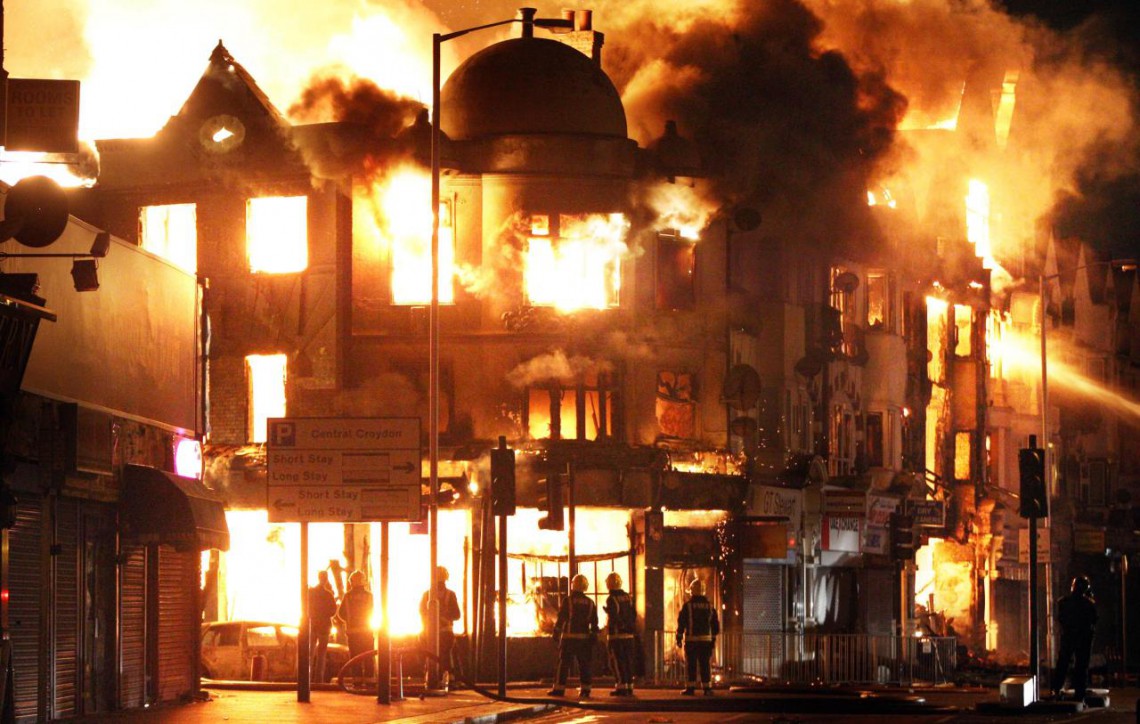 The Establishment were morally and intellectually helpless on those balmy summer days in 2011 when it came to condemning the rioters because ultimately the rioters were acting out the hypocritical double-think nihilism that the Establishment profess to believe in but would never carry out to its natural conclusion.

Most people feel certain about everything outside of themselves. All the plastic fridges, metal spoons, cardboard boxes, wooden picture frames feel very familiar. Lives change, objects don't - or at least not as fast. What is more tangible has become a byword for "more real", though most would be unsure how to define such a concept. But we know what we mean, it means we can do stuff to stuff and measure it. Whatever verb we choose to employ, we can rest assured all the results will be limited and safe. It all feels under control. Scientific laws, no less than Law itself, give us a sense of security.

But at the centre of this comfortable worldview lies an anomaly: the person. In a civilisation that has chosen to define itself around the truth of Protagoras' maxim that "Man is the measure of all things" it has added the important qualification that the measurer is in fact a rather uncertain, unsteady, fickle, capricious creature. And nothing is more useless than a ruler which is not quite sure of its own dimensions/units. If we have conquered matter we have done it at the price of finding a vacuum, a veritable black hole in ourselves. It is why Sartre hates 3 o'clock, why Camus contemplates suicide, it is why Spengler described our civilisation as "Faustian".

Suddenly a literary truth seems to have imposed itself on every other.Whereas the disciplines, specialised in extremis, entombed in an ivory logic, queued up to condemn the dignity of Man to death, politics and society at large have moved at a more considered, glacial pace. There is a sort of double-think/double-speak emerging. Scientific orthodoxies reduce us to monkeys reacting to historically arbitrary chemicals/genes, yet our politics refers to the dignity and inviolability of human rights. Sociologocial orthdoxies reduce us almost entirely to nurture/environment and yet form the vanguard of references to objectively defined "offences". We are reduced inane instruments of accident, terribly fatalistic, yet our Common Law protects the Image of God, the divine spark that lies at the heart of our free will. These inconsistencies are growing. They grind. The tension is creeping into public discourse.

The battleground being consciously or subconsciously fought over consists of nothing less than the validity of personhood. The irony is that the cuddly leftist politics which claims, so superficially and yet successfully, to defend constituents' personhoods is the product of the thinkers and developers of the systems that have historically depersonalised and emptied it. Socialism has never truly confronted the paradox that lies at the heart of Rousseau's thought. In his Social Contract he informs us that Man will be "forced to be free". Similarly Lenin forced Man to be elevated by the state to the "best" system. The EU's logic is terribly similar and its language, though shrouded in bureaucracy, familiar. It is this technocratic language that forms its best and first line of defence: complexity and tedium, which in turn breed apathy and lethargy.

The correction to be applied to such an ugly logic is the validation of personhood, which in turn, has proven to be fertile soil for real direct democracy. In classical Greece the oracle of Delphi implored every one of us to "know thyself". Once we found ourselves in God and it is in God that all our civilisation lies. The engine rooms of our civilisation have since rejected God, whether in a fit of absence of mind which we will live to regret or as a precursor to a more sophisticated relationship with reality we cannot truly say. But a revelation is becoming more pressing. We have failed to come up with a system that sincerely justifies the replacement concept for our "divine image" in "human rights". HR stand tall and lonely, as the other disciplines insincerely doff their hats. So much attention is paid to ECHR/ECJ because we are not quite sure where HR's boundaries lie, we are not even quite sure what they are. And we do not know precisely because they feel inconsistent with the entire direction of the Western intellectual Tradition. But what can be said is that this path, which does not even consider the person worth knowing, that does not even consider your thoughts to truly be your own, is bankrupt on levels far greater than the intellectual.

All Law is a codification of relationships. And a relationship can be no such thing without two actors. Whilst we fail to consider ourselves true actors in any real sense (with real personhood) the Law cannot but continue to fail us. The riots were therefore just a dramatic spectacle of a process that is occurring incrementally. The Establishment were morally and intellectually helpless on those balmy summer days in 2011 when it came to condemning the rioters because ultimately the rioters were acting out the hypocritical double-think nihilism that the Establishment profess to believe in but would never carry out to its natural conclusion.