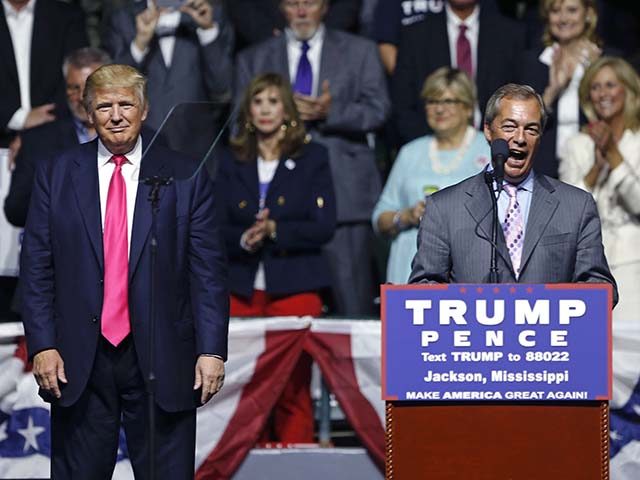 J.A. Moran discusses the serious possibility of a political and cultural counter-revolution against the Left because of the successes of Brexit and President Trump.

It would be easy, and perhaps comforting, for the forces of 'progressivism' to dismiss the events of 2016 as a series of regrettable but otherwise unconnected political catastrophes.

Great Britain's vote to withdraw from the European Union and the election of a conservative populist in the United States of America are brushed aside as temporary aberrations of an inevitable march toward the bright sunlit uplands of a nationless, cultureless, genderless world.

From the French Revolution through the Russian Bolshevists to the emergent liberal anti-culture of the 1960s, the political Left has believed the momentum of destiny has been on their side.

However, the forces of the Left have, fundamentally, failed to grasp the deeper significance of events.

Organised Marxism of the Soviet brand was never a significant physical or ideological threat to Western civilisation. The Communist Manifesto has never been the primer of choice for the thinking Occidental Socialist. One must look to more seemingly innocuous sources to discover the philosophical underpinnings of the modern progressive. The lyrics of the 1971 popular music song 'Imagine' by John Lennon, for example, are a far more pertinent manifestation of the cultural barbarism prevalent in the West today.

'Imagine there's no countries, it isn't hard to do, nothing to fight or die for, and no religion too.'

I can think of few more concise and frank admissions of the ultimate aims of the neo-barbarians of modern progressivism. For the better part of half a century the forces of cultural revolution within the Western Left have ditched their march-banners to embark on a Gramscian 'great march through the Institutions'. From within, they have waged radical, bitter and ceaseless war on the forces of conservative civilisation and do so to this very day.  Local government, the civil service, the broadcast media, education and the arts have all been thoroughly and ruthlessly purged of traditional conservative people, attitudes and ideas.

It would be erroneous to suppose this has taken the form of some vast organised conspiracy, though certainly the Frankfurt School and its derivatives have played a key role in promoting this revolution by stealth.

'A great civilisation is not conquered from without until it has destroyed itself within.' the American historian and philosopher William Durant said of Rome in the third volume of his The Story of Civilisation series. Progressivism has, unconsciously, taken this maxim firmly to heart. What the Left cannot openly tear down, it hollows out, until only a meaningless facade remains which is then easily swept aside as “outdated” and having no “relevance” to the “people of today”.

The Western Left has attempted to destroy the very fabric of European civilisation and construct in its place false idols which they command the populace worship – equality, human rights, feminism, multi-culturalism, secularism and cultural relativism. Failure to participate in this Liturgy of Man is punished with, at best, ritualistic social exile for the offending heretic. Objective beauty must be replaced by calculated ugliness. All true art finds its origin in the contemplation of the sacred. Divinity filtered through the lens of Nature. Progressive modernism, by contrast, deifies artificial man-made abstractions. Its origins reside in the bestial paganism of our most primitive impulses.

We cannot merely be content to defeat the Left at the ballot box. For they, by the means outlined above, have ensured that even when they're not in government, they're in power. The theatre of conflict for the coming clash of ideas will not be the voting booth. It will be the classroom, the university campus, the workplace, the museum and the art gallery.

'Brexit' and Donald Trump are, in themselves, a remarkable symbol of a broader shift in public sympathy away from the liberal social consensus. However, they're also signs of a more significant emerging phenomenon. A coming Cultural Counter-Revolution which could, perhaps, see the reverse of the radicalism of the 1960s. 2016 was in some ways the perfect antithesis of 1968. We've shown them, for the first time in many years, that their vision of the future is not a predestined foregone conclusion. This is the real driving force behind the unconcealed rage and disdain demonstrated by so many progressives when the electorate don't comply with their wishes. For the first time in a long time the Left is frightened. Not of loosing politically but of loosing culturally. Their ideology is so irrational and repulsive to the right-thinking ordinary person they know they can only win, or rather subdue, hearts and minds by subtle, creeping, social change. By the slow but steady normalisation of that which is abnormal. If this creeping change is interrupted or worse, reversed, they know they stand to lose the whole game.

2017 begins with great promise for traditionalists and conservatives of many hues . If France and the Netherlands reject the doctrines of the post-war consensus at the ballot box this year, as they're potentially poised to do, the neo-Left will have a serious, systemic problem on its hands. It will cease to control a significant portion of the West's socio-cultural narrative.

A new era of nationalism and bilateral co-operation with an emphasis on the preservation and defence of Western civilisation would of course be of untold benefit to the world. The threat of Islamism, imported into the West via successive decades of mass immigration, along with the manifest failure of liberal progressivism to acknowledge the cultural degeneracy and social disintegration their blinkered dogmatism has caused, will hopefully be to noose with which they finally hang themselves.