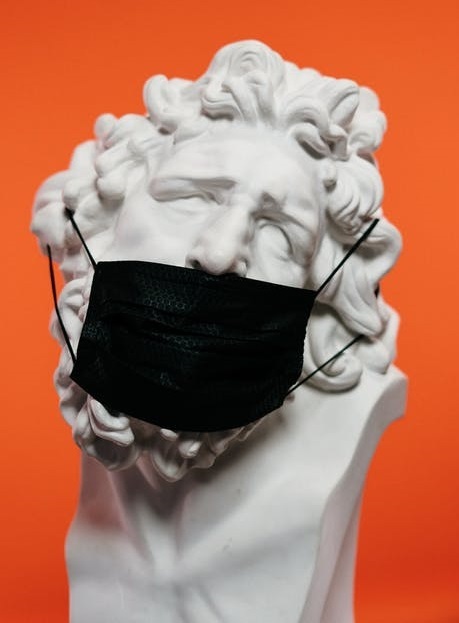 An excellent piece by a correspondent, please also see his books available via Amazon and Arktos.

At the time of writing we are living through a pandemic that had not been anticipated. Causes, origins, infection and death statistics, practical management and touted remedies are all in flux. Unreliable comparisons are made between this and previous pandemics and with war. Death rates and differences in national responses have been publicised. Worldwide, over 8 million cases, 500,000 deaths and 5 million recoveries are reported but the figure continues to escalate. The USA has the highest death figures at 120,000 deaths, followed by the UK at 42,000. Given its population, the UK appears to lead the world in proportional mortality. Many countries, certainly the USA and UK, report many more male than female deaths, elderly deaths, and a disproportionate number of non-white deaths. The public mood appears to swing between hysteria, stoicism and resigned nonchalance.  Initially in the UK, news reporting was quite kindly, with adversarial politics being played down. Gradually, however, perennial sniping has asserted itself.

The Conservative government comes under fire for not being prepared, for bungling management of the lockdown, failure with protection clothing, testing and tracing. In a dramatic reversal of austerity, billions are being released to prop up an economy, like those the world over, in crisis. Boris Johnson, the Prime Minister, was gravely ill with COVID-19 and afforded short-term sympathy. Captain Tom Moore, a Second World War veteran, was fêted for his fund-raising efforts for the NHS as he turned 100. As the lockdown approached two months duration the signs were that many individuals, families, and businesses, were struggling and in some cases beginning to flout lockdown rules. But the government remained cautious and attempted to follow exit strategies being practised elsewhere. A few months since its outbreak, the pandemic and its management remain in flux. We realise that it will end at some stage and reports of progress in vaccine research are eagerly awaited.

One thing that has remained fairly constant throughout this time is the nothing will be the same after this meme. Streets were empty, buses and trains passed by almost empty, road traffic fell to 1950s levels, and millions of us found ways of working from home. Reports of bluer skies and less pollution were not only welcomed by climate change activists but used as a model for a low-carbon society. Calls were made for a new world order, even for a one-world government that would oversee and prevent such disasters effectively. All NHS staff and care workers became heroes, ‘giving their lives’, and should obviously have higher pay when this was all over. Given the large female and BAME (black and minority ethnic) composition of the vast NHS workforce, this was all a gift for feminists and pro-immigration activists. Moutet (2020) argues that the French have an excellent health service without the need to fetishise it, as we appear to do. It was intimated that both BAME and low-paid white people were more vulnerable to COVID-19 because they live in cramped accommodation, have little money (and are more often obese). The Guardian’s writers could barely contain their contempt for the Tories, Malik (2020) swiping bitterly at ‘Anglo-American capitalism’. Miriam Margolyes, the famous Jewish lesbian leftist actor, proclaimed that she had hoped Boris Johnson would die from coronavirus.

In my own increasing boredom and frustration, I was curious to see that Slavoj Žižek had speedily written and published a book on COVID-19 – Pandemic! COVID-19 Shakes the World. It turned out that this is a very small book, 136 small pages with many blank dividing pages, a rip-off at £16.71 including postage. But all royalties were after all going to Médecins Sans Frontières. Žižek is well known as a ‘philosopher’ with his intellectual anchorage in Hegel, Marx and Lacan and a rambling, ranting style that appears sometimes to transcend leftism but always returns to it. In this booklet, he asserts that ’building new walls and further quarantines will not do the job. Full unconditional solidarity and a globally co-ordinated response are needed, a new form of what was once called Communism’. He laments the political decisions of Trump and Netanyahu and hopes that ‘maybe, some British people will gather the courage to feel shame about falling for the ideological dream that brought them Brexit’. The real virus we should worry about, of course, is any ideology that can be called right-wing, nationalist or populist. For Žižek, we have to choose between barbarism or communism.

My understanding of the government’s handling of this pandemic is a personal, not party-political one. It looked ill-prepared, a mixture of bumbling, on-message, panicky and well-intentioned. It offered up easy prey for Keir Starmer and other leftist commentators, with no evidence that they would have coped or would in future cope any better. I suspect that what was needed from the outset was a military or business mindset focusing on logistics, probability and pragmatics. The public showed an extremely high level of compliance with (who today would dare to use the phrase ‘obedience to’?) lockdown restrictions, perhaps in spite of a realisation that not all the facts were known and the politics were not wholly transparent. George Burns had wryly observed that it was ‘too bad all the people who know how to run the country are busy driving taxi cabs and cutting hair’. This time, people were certainly not busy cutting hair, but a majority exercised precautionary practice, while others seemed to know that COVID-19 was no worse than seasonal flu and the lockdown remedy was worse than the disease. A kind of extreme right versus extreme left politics was evident. We needed a Dunkirk spirit, some opined, and thousands indeed volunteered to offer community help and to labour on farms, but these offers were mainly bungled or sabotaged.

In spite of leftist suggestions that the pandemic showed the folly of Brexit and obviously trade negotiations should be drastically slowed down, it looked as if the EU had little to offer, nation states rushing in to protect their own. Marion Maréchal asked ‘how many financial, economic, health and migratory shocks will it take for our leaders to finally understand that this European ‘union’ is a masquerade?’ (Tomlinson, 2020; see also Hannan, 2020). It was difficult to tease apart the British public’s motives in supporting Captain Moore, the old, gentlemanly, military white man, and public support for the NHS. No doubt many radical leftists gritted their teeth at this echo of ‘white supremacy’. While Rishi Sunak played his (economic and ethnic) part in the Conservative response, the ‘BAME people suffer more’ trope was stronger. The fact that old men were the main group vulnerable to COVID-19 was almost forgotten. When the Oxford Vaccine Group led by Professor Sarah Gilbert looked like a candidate for producing the first vaccine against COVID-19, this was one sign that perhaps the UK still had some of its greatness left. But Dr Emily Cousens worried that ‘it will be used as it has been in the past, to fulfil its political, patriotic function as proof of British excellence’ (Cousens, 2020).

During this period, significant illegal immigration was continuing, boats arriving across the Mediterranean and the Channel daily. Illegal and legal immigration has been transforming the British cultural landscape for many years (Banks, 2019). People arriving daily from abroad by plane in the fraught early months of 2020 were not being tested or quarantined. The UK has continued to rely on foreign labour in many sectors and on foreign investment. Anti-borders activists do not wish to confront the problem of transnational diseases. The Conservative record since 2010 has not been glorious, electoral and leadership problems, and stalled Brexit negotiations notwithstanding. This is not to say that a Labour alternative would have been preferable. As we wonder how long we have to face the current COVID-19 crisis and whether we have the politicians we desperately need, the choice between a muddled Tory government with a 78-seat majority and an impending economic disaster, or an opportunistic Labour government in 2024, is not a thrilling prospect. It is doubtful if the COVID-19 event really resembles any war but the huge economic impact waiting to be fully revealed, plus opportunistic leftist activism, could trigger a debilitated hunger for a feelgood nationalisation programme and boosted welfare provision. Youthful climate activists will be enthusiastic about converting the benefits of lockdown into anti-capitalist policies. We may indeed need some such large but temporary political and economic adjustments in the near future.

Britain has been weakened by decades of cultural Marxism and appeasement by successive governments. If there are any lessons to be learned from COVID-19 by the political right, they may include these. While we complain about this and glibly liken it to the last world war, most of us have sat on our sofas, bored and frustrated perhaps, and some suffering badly and dying. But this is not five years of war characterised by conscription, the death of nearly half a million, including mainly young military men, and about 67,000 civilians, with many more maimed and traumatised. War is awful but prolonged peace is, sadly, also problematic as nations become flabby dysgenic entities (Banks, 2020). It remains true, I believe, that the right grasps the brute tragedies inherent in the human condition, while the left naively strives to erase this.

Nations can thrive with a sense of collective identity and are fragmented by excessive multiculturalism: although we can’t go back to an idealised past of white ethnic purity, we should aim in that direction. We need to recall and re-create a sense of British excellence in education, industry, engineering, and entrepreneurialism. Societies with an abundance of youth and ethnic cultural arts, sport and entertainment are fine, in proportion, but real enduring wealth is vitally linked with intelligence, whole-group identity, hard work, and self-sufficiency. A hunger for positive national change does not necessarily align with leftist politics. Indeed, the majority British public shows by its voting choices, stoicism, and memory of past triumphs, that it has no longing for revolution. Our traditional heroes are now mostly dead, however, and strong new leaders are scarce. Cultural Marxism has eroded respect for strength and intelligence (Brown, 2015). The required strong leadership doesn’t equate with political dictatorship, or superficial strength, however. What we need, I submit, is intelligent leadership, and teams of intelligent leaders who are steeped in due history (not doctored postcolonial studies), shrewd analysis, balanced vision and integrity. Historians like Niall Ferguson (2020) and Victor David Hanson (2020) may show the way. But fostering many more such future leaders must be a priority.

Žižek (correctly, I think) says we face a triple crisis – medical, economic and psychological – but I suggest we amend this to a quadruple challenge: the fourth component is visionary-philosophical. Bewildered and dazed though we may currently be, and tempted towards defeat, denial or fantasy, some among us might envision a new politics building on tradition but stepping into a better informed, realistic, robust and crisis-ready world that yet has room for development.