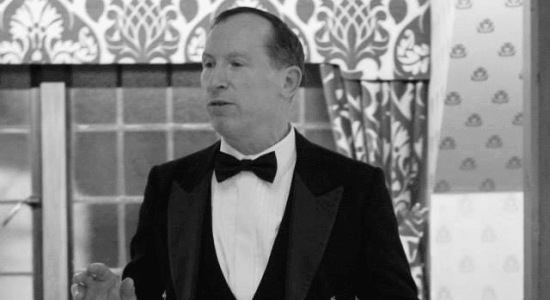 The conference was opened by speaker Sam Swerling, a veteran of the traditional Tory Right, a Conservative Westminster City Councillor in the 1980s, former Chairman of the old Conservative Monday Club, retired consultant solicitor and a well-known law lecturer of over 30 years standing. Sam addressed the conference on the history and make-up of the French Front National, the intellectuals who have been in it and those who remain in it, the usual left-wing media smears against it, such as unfounded anti-Semitism, its huge popularity and its inter-action with traditional French culture at a number of levels.

He was followed by the Oxford-educated leading Roman Catholic intellectual and one of the TBG’s Vice-Presidents, Christopher Gillibrand, who addressed the conference on the subject of religion and culture and how the two are entwined, and how we must reject modern strands of paganism. He believes proper approaches to issues related to human dignity are key to the reform of the modern decadent political system.

The well-known and controversial former UKIP Member of the European Parliament, Godfrey Bloom, T.D., then spoke on why he felt traditionalism and libertarianism were not necessarily incompatible. In a wide-ranging address he commented upon fundamental freedoms which were today being attacked by our entire mainstream political parties under one guise or another. He was especially disappointed that this malaise had now infected the UKIP; and was especially critical of the EU and its Brussels-based government. His passionate patriotism for our country was clearly evident in all that he said. He received a standing ovation.

At this point conference broke for luncheon. Last year some delegates complained that they had not been invited to the committee and speakers’ luncheon and so this year a very splendid three course buffet luncheon, with wine etc., was laid on for all who wished to pay the extra for that. The quality of the food was highly praised.

Following lunch our first speaker was the well-known bilingual barrister-at law, Adrian Davies, a well known figure on the traditional conservative Right. A former member of the old Monday Club Executive and leader of the short-lived Freedom Party, for whom he stood in the General Election in 2005. Adrian addressed the conference on the subject of culture and political engagement, as seen from The Right. An engaging (sic) and occasionally humorous talk he was extremely well received.

Next was our youngest speaker ever, Keir Martland, who is in his final year in secondary education. He was sometime editor at the magazine The Libertarian and is now Director of Youth Affairs at the Libertarian Alliance. He joined the Conservative Party at a very young age and was a Secretary in ‘Conservative Future’ (sic) for some time, eventually terminating his membership over immigration, gay marriage, Europe, and other issues. His is a great advocate of the philosopher Hans-Hermann Hoppe, of English libertarians such as Sean Gabb, and to a lesser extent English conservatives such as Peter Hitchens, Theodore Dalrymple, and Roger Scruton. Keir addressed the conference delegates on the subject of Family and Culture, and Family Structures.

Tomislav Sunic, the writer, translator and professor, who received a doctorate in political science in 1988 from the University of California, was our next important speaker. From 1988-1993, he taught at three major universities in the USA, and from 1993-2001, he served in various diplomatic positions with the Croatian government in Zagreb, London, Copenhagen, and Brussels. He addressed the French Senate on 15 January 2007, during a conference entitled "Nationalismes et religions dans les Balkans occidentaux" (Nationalisms and Religions in the Western Balkans), and he has lectured widely on Carl Schmitt, the famous German legal political theorist. Tom Sunic's articles have been published in a variety of international journals. He is best known for his criticisms of egalitarianism, biblical monotheism and liberal political discourse. His views are often cited as part of the Nouvelle Droite movement in Europe. Tom addressed the conference on the subject of ‘Education and Culture: Modern education and the destruction of culture’ where he assessed the dangers from the liberal-left enemies within our educational systems and the unhealthy influences they were having on our children, seemingly without opposition from so-called conservative governments.

Our next speaker was another of the TBG’s Vice-Presidents, Professor John Kersey. An interdisciplinary historian whose work spans the three principal areas of music, education and traditionalist Catholicism, he is currently President of European-American University. The author of several books, he has in addition recorded over 100 CDs as a concert pianist, including the first recordings of several unfinished works by Beethoven. John is also the Director of Cultural Affairs for the Libertarian Alliance, for whom he also writes. He gave the conference a magnificent address on ‘Music and Culture’ including the malign influences of appalling modernists and the Marxists who also aim at the deconstruction of real music as part of their assault on a traditional society.

Our next speaker was supposed to be Paul Weston of Liberty GB, who, although had been with us through the afternoon, was called away by medics attending his mother. In any case we were now running over time, and our founder Vice-President, Gregory Lauder-Frost, the person the liberal-left love to hate for his trenchant traditional Toryism upon which he refuses to compromise at all, despite the endless smears and attacks, wound up the conference with a rousing talk on the importance of fighting for our nation on every front. He said that as long as we continued to stand up for traditional society in every cultural sphere we will be attacked. But, he said, we owed it to our ancestors to fight on, and that included halting mass immigration and encouraging voluntary repatriation of aliens already in Britain who, he felt, would ultimately, by a variety of means, affect our native culture like a cancer.

All speakers were extremely well received by the audience and cheers went up on a number of occasions. Although numbers were down from our record last year (doubtless a result of left-wing media attacks upon us) the 2014 conference was an outstanding success. Delegates heaped great praise upon it. Our thanks go to all who participated, in whatever capacity.