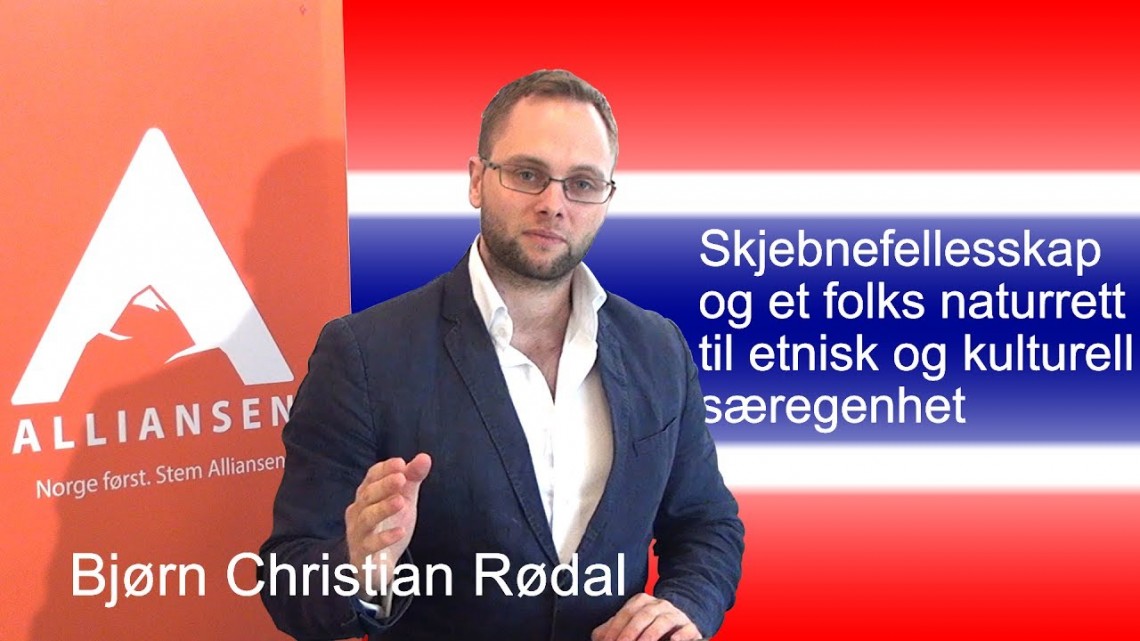 Norwegian sovereignty advocate and politician Mr. Bjørn Christian Rødal discussed his movement at the Traditional Britain Group's October 2017 Conference. Mr. Rødal urged cooperation among all European political movements devoted to the renewal of their respective nations in the battle against globalism.

Thank you for inviting me, it is an honor to be here.

I will be speaking about how our new party is different to other parties in Norway and how our goals can be achieved. And I hope that I can share with you some new insights.

There is much that can be said about this, both in how we operate and are organized.

Much of what we have done can almost be compared to guerilla tactics and asymmetrical information warfare.

We are calling our approach or style if you like Nationalism with a Smile.

That means that we are approaching a lot of our problems with an overwhelmingly positive attitude, humor and optimism. Giving people hope and energy to fight in an uphill battle. But more on this later.

Our primary goals are as stated National independence for Norway and to take control of our borders.

We also seek to reverse the demographic development in our country in order for Norway to remain a homogenous society.

In concrete terms that translates into an exit of the EEA (European Economic Area) that we have with the EU, and to leave Schengen.

But we are dealing with powerful globalistic institutions and networks.

This is a fight that is near impossible to win alone.

That is why I believe we need alliances and cooperation between traditionalist and nationalistic movements across Europe.

We need as sovereign nations to reject the globalism, each and one of us, this way as the globalists lose control in one country they will be overall weakened.

It was in fact Brexit and then the victory of Trump in the US that created the opening for us to start this party in Norway.

That is a testimony that this is an international process. (However, with stress on “national” in this context.)

It goes to show how important it is for us to support each other across national borders, all the while remaining independent from one another.

We need a decentralized network of counter-movements all over Europe and the Western world.

First and foremost, it is moral support and inspiration that is the most important currency that we can give each other.

A leading example or an act of courage can go a long way to inspire others.

A victory for a national-conservative or a traditionalist in one country can give a huge boost to other movements in other countries.

However, what is equally important is that we give each other legitimacy as a viable political, economic and intellectual alternative.

This is something we must continue to increase our efforts to do.

We need teachers, professors, local governors, priests and community leaders to embrace an “ideology” based on tradition and true conservative ideas.

As opposed to the fake conservatives and the cultural Marxists we have today.

By starting The Alliance, we did something that was not supposed to happen.

It was a great shock to the establishment that we were even able to get the required signatures and form a political party.

And we collected the signatures in less than two months, which is an all-time record. No one has done it so fast before.

Each time we came under attack from the media and other established groups we moved the front forward.

We were able to put the establishment in Norway on their heels so to speak. We were also able to bate the media and that gave us exposure like no other.

Often, we provoked on purpose. We did stunts, we were active and present out on the street and grabbed situations as they arose.

Always ready to record a happening and being the first provider of information, telling the world our narrative. Or Radical Truthfulness as we call it.

Throughout the election campaign we have shifted the discourse in Norway.

New debates that were previously not allowed or aware of is now being debated even on national platforms.

Things that were considered impossible to say in public before are now coming out.

About globalism, mass immigration and the undue influence that global groups and networks have on our country and in the rest of the world.

We cracked a hole in the façade. This has made an opening for others in Norway to dear speak up as well.

Currently one of our greatest challenges in Norway, and I should say dangers, is that we have fake conservatives in government.

This is very problematic because it gives false hope.

They say they are against immigration and the erosion of our heritage and culture.

But in truth they are deeply mired into the neoliberal world order.

They are part and parcel of the globalist agenda of erasing national borders, sovereignty and local identity.

This is in fact more dangerous than the radical policies of the liberal left, since it diverts the resistance against immigration towards alternatives that does not work.

And in the meantime, the masses of voters get appeased believing that the sitting fake conservative government will sort things out.

But it will not get sorted out, because the fake conservatives are operating on the premises of globalism and cultural Marxism.   That is why the established neo con parties need to be rejected.

They must be delegitimized as a political alternative.

And new parties such as The Alliance should, and will be presented as an alternative, to those that want to preserve their heritage and national independence.

Further our strategy in Norway is to bring three distinct and different groups together:

The Christians, Labor-unions and the new budding nationalistic counter movement.

Each of these groups that I mentioned have their own reason for wanting to leave the EU, support national independence and stop mass immigration.

The Labor-unions want to avoid social dumping and a cheapening of their trades.

The nationalist movements obviously want to preserve our heritage and independence.

And the Christians should be concerned with losing ground firstly to post-modern decadence and secondly to Islam.

I want to encourage everyone in our movement to get involved in your local church.

We need to take back our churches. Make them bastions of tradition again.

I do not know how it is here in Britain, but in Norway we have Church elections.

As a citizen you can vote and run for a non-ordained office in the church.

And very few people know or care about this. So, this is a great opportunity for a self-conscious nationalistic movement.

I know that within the nationalist movement there is a conflicted view of Christianity.

But Christianity has absorbed ancient European traditions into itself, and it is still a living tradition, despite being very weakened lately.

Further I will encourage you to employ Radical Truth, that is to actively seek out lies and to expose them, no matter the controversy.

Never back down or apologies for speaking these truths.

And most importantly; Do it with a smile ?