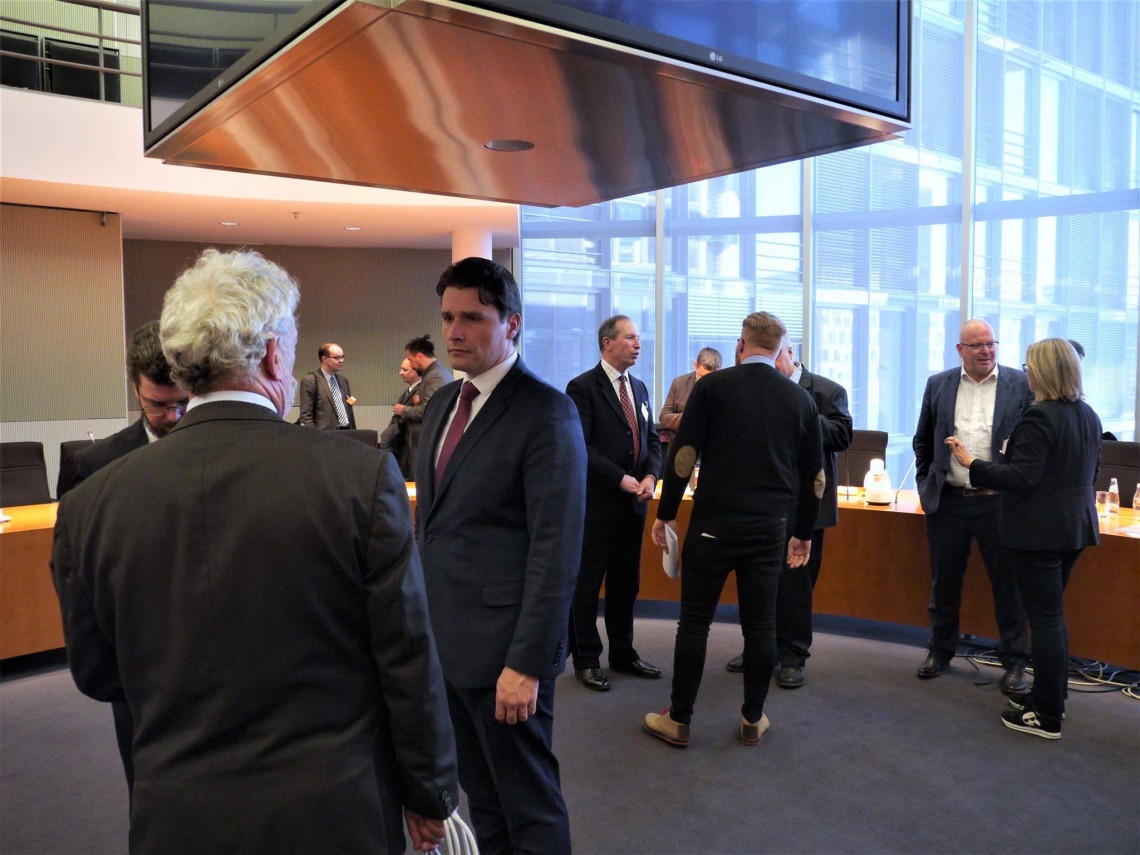 Vice-President Gregory Lauder-Frost addressed the Alternative for Deutschland's Conference on Preserving European Civilisation, Culture and Values. Held on April 1st to the 3rd in the Reichstag, his address was met with approval and agreement. The AfD is Germany's rising national-conservative party with increasing support across all levels of Germany society.

Summary of the address by Gregory Lauder-Frost,
Vice-President of the Traditional Britain Group
3rd April 2019.

I would like to thank the organisers of the AfD conference on Preserving European Civilisation, Culture and Values for inviting me to attend.

There has been much discussion on what is wrong in Europe (includes the UK). I would like to look at the causes and what should be done to address this.

Some writers today argue that there is no Right and Left any more. I cannot agree with this. The decaying society we see all around us is a result of the twin cancers of liberalism and socialism. We need to remember that before socialism raised its ugly head liberalism was the enemy and the threat from The Left. It was eclipsed by the rise of socialism. Both liberalism and socialism today have similar aims but for different reasons. Both are internationalists and globalists, liberals because of trade and the pursuit of profit at all costs, and socialists because it is part of Marxist dogma. I have always argued that socialism was communism for slow learners.

These treacherous partners have been behind the dumbing down and slow drip-feed destruction of our society, whether it be in dress, music, literature, heritage, history, culture, architecture, the heterosexual family unit, Christianity, God and nature, and much more. They are, for their different reasons, opposed to the nation states, to the nations who created them, to the unique cultures which sprang from them. Since the 1960s they have enacted legislation across Europe which was aimed specifically at patriots and oppressing them. Political Correctness, which stigmatises and even criminalises all those who speak out against this new 1984 ‘end of civilisation’ scenario is now the dominant feature of our societies. One of their main vehicles is advertising, firmly in the hands of these enemies, ignoring the overwhelming indigenous population in all countries and instead portraying a fictional equal multi-racial and multi-cultural society which most normal people do not recognise or experience. It nevertheless is part of the drip-feed on the psyche and they know this. They are supported by the media, virtually entirely in the hands of The Left, portraying all normal people who protest against the encroaching disaster for their countries as “extremists” and “Far-Right”. They refuse to discuss the issues confronting us. Labelling good patriots as quasi-criminals is far easier and final. They brainwash our children with words such as “inclusion” and “tolerance” and openly teach them chronic degeneracy. Obviously anyone studying history knows that there is in fact virtually no history of “tolerance” or “inclusion” in European civilisation and no good reasons for it. They constantly rant about “Liberal Democracy” and its “values”. The historian will rightly point out that the history of democracy was not liberal. The conservatives always controlled it or even introduced it. The phrase “Liberal Democracy” is a new tool of The Left to suggest that without liberalism we would not have democracy. This is a lie. There is no connexion between a man casting his vote in a ballot box and liberalism. Indeed in many countries the majority of those casting their votes are not liberals and are insulted by this phrase.

Our “values” are inherited from Christianity which is the foundation of civilisation in Europe. Not from ‘liberals’ or ‘democracy’. Legislating for degeneracy is not a value.
The Liberal-Left today attack our nations, our national consciousness, normality and rational reasoning, constantly apologise for the errors of past generations, including erecting monuments to shame, and encouraging national and/or racial guilt complexes. In Britain they have erected a statue to a card-carrying Communist Terrorist in Parliament Square.

But the biggest threat today to our continent, its civilisation, its heritage and culture is mass alien immigration. In the Oxford English Dictionary the word ‘alien’ means someone who “does not belong” here. In Africa and across all Asia alone there are over 4 billion people, many of whom could argue that they live under repressive governments and/or their lives are in danger. China remains a Communist State where tens of millions have been murdered since they assumed power. These people cannot all come to Europe. They have nothing to offer us. Assimilation is simply a fantasy. How can an alien identify with our heritage, our history, our cultures, our souls? If you went to work in, say, China, and your wife had a child while you were there, would that child be Chinese? If you decided to settle there, how long would it be before you were accepted as “Chinese”?

What is to be done?

If we are to reverse the rot before it is too late radical political parties are needed who will continue to speak out on the above fundamental issues, despite the attacks.

Education is the key and this is one of the reasons The Left are making very serious attempts to censor the Internet – so that the masses remain receiving only their evil destructive message. Sir Roger Scruton, the famous English political philosopher, has pointed out that one of the greatest cancers is the existence in our education system of Leftist ideologues and activists. We cannot have our enemies educating our children. Laws need to be introduced removing such activists from the classroom. We would not allow Nazis to teach our children so why do we allow communists and socialists?

We must move away from the French Revolution’s obsession with secularism and anti-clericalism and return to Christianity, the very basis of our civilisation. All other pagan faiths must not be given equal space or consideration - they have contributed nothing to our civilisation and should receive nothing. Our schoolchildren must be grounded in a proper and thorough understanding of Christianity and how our civilisation was built upon its values. They must be taught our nations’ proper history and to be proud of it, and their nation’s greatness and achievements, whether large or small. Everything is relevant. Every nation has something to be proud of and the more the better. Our children must grow up proud of their nation. Instead of the vacuum of liberal individualism and the anything goes and ‘who cares?’ ‘culture’, the old maxims and balances of duties and responsibilities to yourself, your family and your nation need to fill the void. The teaching of real music and national literature will assist this. In my opinion school uniforms are an essential part of dignity and belonging and encourage pride in one’s appearance.

In 1970 the British Conservative Party pledged in their General Election
Manifesto that they would halt mass immigration and encourage voluntary repatriation to natural homelands. It was suggested that some kind of payment by the State would be involved.
As we have all grown up with the lies of politicians it is no surprise that this fake conservative party ignored this pledge once they were elected. Today they are just another liberal party.

Radical action is required and legislation needs to be changed so that the welfare state which was established for OUR people is unavailable to anyone else. People should be told before making a trip to Europe that there is no housing and no money for them. Shutting off the welfare will be the end of alien immigration. Social housing should only ever be available to the indigenous people of a nation. No-one should be admitted to your country to survive in it on any kind of welfare. No child benefits should be paid to aliens. Just shut it all off. Once this happens every assistance through a State Agency should be made to help people return to their natural homelands where they can ask for welfare from their own people.

We must reject open borders and the right for anyone from anywhere to enter our countries. Of course The Left will immediately scream ‘fascists’ and ‘Nazis’ and the correct response to this garbage is to advise the attackers that the fascists and Nazis did not have a mass immigration problem. We do.

We must all withdraw from the outdated United Nations Convention Relating to the Status of Refugees, also known as the 1951 Refugee Convention, which has proved unworkable. Any other similar conventions must be withdrawn from.

It was a great error for the German Government to change their requirements for citizenship which until recently insisted that you could only become a citizen if you had German blood. This is a perfect and natural requirement for any European country’s citizenship laws. All others should be required to have work permits and/or residency permits which should have five year limits on them. Everyone entering the country should have to stop at border controls and passports should be stamped with visitor status for holiday-makers giving them a maximum of six weeks stay unless the embassy of the nation in their home country has especially granted a longer visa.

Work permits and assessments for them will also slow the flow of young people from eastern European countries, which now threatens the very existence of those countries.

Lastly, European real estate should only be permitted to be purchased by resident Europeans. Not by people in other parts of the world. Also, the Americanisation of Europe must be stopped by every means possible.

I appreciate that my proposals are tall orders. However we need radical parties who will propose legislation, amendments to legislation, and even repeals of legislation, in the same drip-feed manner that The Left have managed to get their evil on the Statute books. Every time it is turned down by our enemies it must be reintroduced – again and again. We need a full restoration of sovereign nations making their own laws and decisions, full freedom of speech, abolition of national shame and apologies, and the encouragement of national ideals, dignity and self-preservation.