The British people must be able to continue to enjoy the hard won rights of our ancestors, those freedoms which since at least the 1960s have been incrementally subject to a death by a thousand cuts.

Please find below the TBG's response to 'Lord' Walney's Independent Review on 'Political Violence and Disruption, on behalf of the Home Office. This is a more standard prose version of our submission, due to the question and answer format of the review. 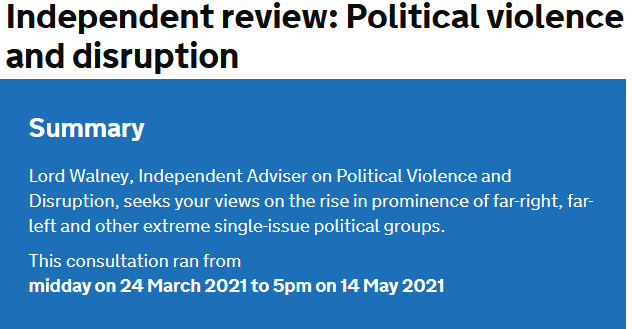 This submission is from the Traditional Britain Group, BCM Box 9045, London, WC1N 3XX.

Firstly, we do not accept that 'Lord' Walney, a firm socialist, is a fit and proper person for this role. In our view it is impossible for such a person to be "independent" on these issues. Socialism is, we believe, part of the nation's problem.

Secondly, there is the question of what actually constitutes "Far-Right". In the UK this label is coined by The Left and media driven. People who before 1940 would have been considered 1st class Tories are today labelled "Far-Right". Today's Liberal-socialist alliance has virtually outlawed the opinions of all those who do not comply with their ideologies and dogmas, and legislation has been enacted against them. We know of no legislation targeting leftists.

Thirdly, we do not believe that there are any notable and/or large "Far-Right" groups in the UK who have any intention, organisational abilities or means to engage in "political violence and disruption". We believe this to be a broad left-wing fantasy to deflect attention from themselves, and from the internal Islamic threat to Britain which the government appears unable to comprehend. The organisation of terrorist cells, large and small, by Islamic fanatics, immigrants as well as aliens, yet born in the UK, has been excessive, well publicised, and deadly. To observe and condemn this blatant murderous activity should not make one "Far-Right". Those very few individuals that the press has outlined as 'far right' terrorism, appear to be young men suffering with autistic tendencies who have collected reading material that is effectively prohibited (despite the abolition of a banned books list in the U.K.) and in semi-anonymous forums said stupid things as hormonal teenaged boys have a wont to do on a myriad of subjects.

Fourthly, we believe that over the past 30 years at least, all other organised "political violence and disruption" has come from the broad Left in politics, including the Far-Left. We would draw your attention to two books in particular - "No Retreat" by David Hann and Steve Tilzey (ISBN: 1-90385-422-9)(2003) and "Beating The Fascists - The Untold Story of Anti-Fascist Action" (ANTIFA) by Sean Birchall (ISBN: 978-1-904491-12-5)(2010) in which revolutionary socialists brag about their violence towards others in society. This is also evidenced by the victimisation of so-called right-wing groups and individuals. Employers are openly targeted by The Left for employing those they despise and threats are made to employers accordingly. Moreover, when groups wish to hold a meeting for discussions or conferences venue proprietors are threatened with various forms of violence if they permit such a meeting to go ahead. We know of no "Far-Right" activity or domestic terrorism along these lines. All this activity comes from The Left.

To even suggest that there is some kind of Right-wing activity which compares with the above, is imagination run riot, and a deliberate political policy aimed at anyone who does not approve of governments' policies. We feel therefore that your consultation may be aiming to confirm decisions you have already reached.

Let’s delve into the descriptive detail.

For the general public, the concept of ‘violence’ has a clear definition. For public transparency and legitimacy this review must therefore be clear about its terms and whether its own definition is in close proximity to the concept of violence shared by most of the public or something else.

We submit that the public understanding here is: of the intentional use of physical force or the realistic threat of its use by political actors. Terrorism is its clearest example.

From an objective vantage point, this understanding has been undergoing some definitional expansion both via governmental, quasi-governmental and non-governmental agencies.

Many of the latter are activist groups with clear vested interests in these expansive endeavours and many of them will additionally be responding to this Open Consultation. They are also often funded by state bodies or very left-wing charities and are pushing our culture in a more left-wing authoritarian direction.

As outlined above, there is some concern, therefore, that this "independent" review may become an outlet which either reinforces this expansive overreach, or perhaps even develops it further.

This general outline of this kind of expansion can be summarised as follows:

Political violence is any type of act which seeks or threatens to undermine the cohesion of society as conceptualised by the governing class or by taking advantage of disharmonious trends for political advantage. State actors can legitimately restrict these activities to uphold the social order or to allow the social objectives of government and ancillary state actors to be upheld.

Countless examples can underline this, many of them boosted during our previous Prime Minister Theresa May’s term of office as Home Secretary, when she acted upon the advice of known communist "anti-fascist" organisations.

As British society moved ever further from a core of ancestral British people, a newer national conception ('civic nationalism') was increasingly pushed that sought to represent the national consciousness instead in terms of "value" constructs that should be above criticism and state enforced. Firstly it was ‘multiculturalism’, later Theresa May’s manufactured and questionable ‘British values’, which will be remembered by all.

There is an increasing tendency to categorise those who deviate from such values as radicals and to place those who express dissent as being extremists which the state now places within a subcategory of terrorism. So we have regular examples from the media and elsewhere of Prevent calling on the religious or socially conservative as part of CONTEST, the state's counter-terrorism strategy. That these outrages against decent ordinary, people continue is a point of deep ongoing concern.

The Coronavirus era has also furthered and reinforced these trends, by embedding into the public consciousness the belief that a heavier state hand is critically required to ensure the general well-being of the population.

From the earlier media moral panic that Russia was actively seeking to undermine Western democratic societies with disinformation (a claim that turned out to have very little substantive evidence) has now grown in our Covid era into the belief that ideas are often weapons that promote disinformation or misinformation which the State can legitimately inhibit wide scale dissemination of, currently through pressure upon private internet platforms that are now being codified in law. This is a blatant censorship of British freedoms.

It is no surprise therefore to find in the brief notes regarding your review the opening sentence “The coronavirus (COVID-19) pandemic has coincided with an increase in activity and prominence amongst far-right, far-left and other political groups.”

The government’s ominous Draft Online Safety Bill has just been published and it seeks to oblige social media monopolies to restrict certain type of content that could cause tiny percentages of the overall population distress at the expense of the overwhelming majority population. It also seeks to set up an “Advisory committee on disinformation and misinformation”. Massive financial penalties will be able to be imposed for those who do not comply quickly enough.

To conclude, it is our belief that the United Kingdom is suffering from too many laws, not too little. Almost all the actions of those who engage in the commonplace definition of political violence are already covered by a plethora of existing laws in Britain. The issue is the willingness of the CPS or Home Office to apply criminal or civil charges to these people and often too, the use of questionable international human rights commitments upheld by judicial activism which enables them to escape sanction.

The starting point regarding political radicalism must be that advancing your political cause through writing, communication or protesting is and should always remain sacrosanct. The boundary point should appear when the action of the political group in question has a direct or indirect consequence of impeding the rights of other British citizens or agencies to go about their daily tasks without inhibition. Too often protest groups who all too invariably are on the Left of the political spectrum disrupt society, by blockading parts of the country or threatening opposing political groups or intimidating private venues. We have a ban on political uniforms in this country, but activists on the Left have carte blanche to adopt ‘black block’ to disguise themselves when going about their intentionally criminal activities. The State should treat these clothes choices as political uniforms when worn in particular settings and also utilise new technology to enable them to later apprehend malefactors (such as special inks that can be applied to those refusing to leave) .

The British people must be able to continue to enjoy the hard won liberties of our ancestors, which since at least the 1960s have been incrementally subjected to a death by a thousand cuts.