‘Why Traditional architecture matters, and what it means to our culture’. 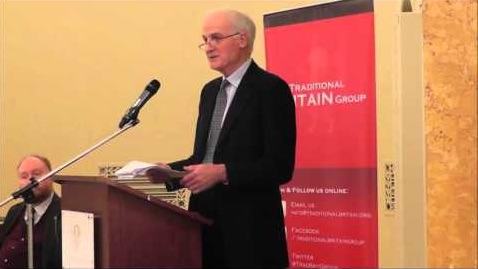 Quinlan Terry discusses the importance of traditional architecture as an expression of the nation's culture.

I fear that after the weighty matters of our other speakers, which I entirely endorse - the subject of Architecture must seem rather lightweight and on the fringe.  In a dangerous and confusing world, architecture is a secondary issue; and it is only in a peaceful world with a reasonable outlook of equanimity, that architecture becomes much more important and relevant to us all.

My subject is “Why traditional architecture matters, and what it means to our culture”.  I guess that most of you have a pretty clear idea about what we mean by “traditional architecture”, but in case some of you are a little vague, I would define it, “as the way of building that has been handed down to us by our forefathers for countless generations”.  And it must be clear to all of you that this is not the sort of architecture that is being put up all around us today.

I won’t waste your time in describing all the differences between traditional and modern architecture, except to emphasise one major difference which is longevity.  Traditional materials - loadbearing masonry in stone, brick and lime mortar is the structure of all the great historical buildings which last for centuries - even millennia; whereas the modern materials - steel, reinforced concrete, large sheets of glass and plastics will produce a building which has all sorts of advantages - (particularly cost), but they will last for only a few decades.  This is because modern materials all have such a high coefficient of thermal expansion - (they expand when the sun comes out and shrink when it freezes) that they have to insert expansion joints at regular intervals - every 15 feet or so - and the joint has to be covered with a flexible plastic seal which breaks down under sunlight and thus allows water penetration at the joints, and so the life of the building can be counted in decades.  A recent American report on the life of steel and glass high rise buildings put their useful life at 25 years.  They may last a little longer, but after 40 years or so they are often demolished, the materials cannot be recycled so they are dumped in a landfill site and the laborious process of reconstruction begins again at phenomenal financial and environmental cost.  So Modern construction as a means of providing a permanent home or place of work has been a failure from conception to the grave, and more seriously, it expresses a culture that has no history and no future.

I have many friends from Poland. They remember Warsaw flattened at the end of the war.  They also remember, that before they rebuilt their hospitals or schools or blocks of flats, they painstakingly rebuilt their historic centre - stone by stone and brick by brick to be just as it was. They had to do it, because that was their identity!

In my view the man who wrote most wisely about what good architecture means to culture was Sir Christopher Wren.  Few people know that Wren wrote anything about architecture; but this is what he said, in his Parentalia:

“Architecture has its political use.  Public buildings being the ornament of a country, establishes a nation, draws people and commerce; makes people love their native country, which passion is the original of all great actions in a Commonwealth”.

“The emulation of the cities of Greece was the true cause of their greatness.  The obstinate valour of the Jews, occasioned by the love of their Temple, was a cement that held together that people for many ages and through infinite changes”.

“Architecture aims at eternity; and therefore the only thing incapable of modes and fashions in its principles is the Orders”.

(By that he means the classical Orders as we now know them; what we call, Doric, Ionic and Corinthian.)

He goes on ……… “The Orders are not only Roman and Greek, but Phoenician, Hebrew and Assyrian being founded on the experience of all ages, promoted by the vast treasures of all great monarchs, and the skill of the greatest Artists and Geometricians, every one emulating each other; and the experiments being of great expense, and many errors, is the reason that the principles of Architecture are now (by which he meant the 1660s) the study of antiquity, rather than fancy.”

Clearly, Wren had contempt for fancy, and a reverence for antiquity.  Whereas in our Modern world it seems that the principles of architecture today are the study of fancy (or novelty) rather than antiquity.

Let us now briefly trace this same theme that Wren describes and see how it has benefited - and later deserted - Britain.  Those classical Orders as Wren says are more ancient than Rome or Greece (in my view they go back to Solomon’s Temple in Jerusalem and before); - (but that’s another lecture!) - that melodic line after the fall of Rome and after the dark ages, was revived at the Renaissance by architects like Brunelleschi, Alberti, Bramante and later Palladio who reworked these same Orders all over the Veneto.

This soon inspired British architects like Inigo Jones and Wren and Hawksmoor and Vanbrugh and Gibbs and Kent.  It spread to America (Jefferson at Monticello) and back to Britain in the 18th and 19th centuries; - Adam, Wyatt, Soane, Barry - even Pugin and Street (for Gothic is one variation of the classical tradition) and even into the beginning of the 20th century there were competent architects like Belcher and Lutyens …………..

And then slowly and sadly through the 20th century traditional architecture declined as Britain declined through two world wars and as Modernism became the image of their “brave new world” - an international style where the raison d’etre was to reverse tradition in the choice of materials and construction and style, and erect structures in steel and glass and cement and plastics, wholly dependant on the consumption of fossil fuels in the fabrication of these new materials and the servicing of these buildings.

The result today is that no major public buildings are erected in the classical tradition, and that all the schools of architecture; all the Royal institutions (like the Royal Institute of British Architects, the Royal Academy, the Royal Fine Art Commission) and all Government appointments are totally opposed to the return of Britain’s classical tradition. Over the last 100 years we have not built any public spaces comparable with say, Parliament Square - even Bedford Square or the centres of cities like Bath, Oxford, Cambridge or Edinburgh.

It also has to be said, in passing, that with the decline of traditional architecture we also observe a parallel decline in art and music and morality and the nations loyalty to their Christian convictions.

I realise that I am being gloomy pointing out our present crisis which leads to the death of our culture.  BUT, there may be just a glimmer of hope, for a crisis is “a crucial turning point in the course of something - especially a disease, when things develop either for the worse - or for the better”.

Clearly traditional architects are at present hugely outnumbered by Modernist architects, but sound convictions based on common sense matters more than numbers.  All my life I have swum against the tide, and in the process I have made many like-minded friends who share my defiance of the values of modernism in architecture, art, music and theology. But I now begin to wonder whether the worm will begin to turn.

When Raymond Erith died in 1973, he and I were virtually the only serious classical architects in practice.  Now, there are over 40 younger practising classical architects in Britain and there are many more in the US.  At Poundbury, the Prince of Wales (who is constantly ridiculed by the RIBA) has employed about 25 traditionally minded architects, including ourselves, to build what amounts to a traditional small town adjacent to Dorchester.  It is not perfect, but it is a king in comparison to all the new developments.

I used to make my living building large private houses, (for those who could afford it), down some leafy lane far from the madding crowd; but now we are beginning to move into town centres.  It may have taken 25 years for my Richmond Riverside Scheme to be regarded as a serious alternative to Modernism, but we have now been appointed to do Twickenham Riverside and a number of similar developments.

I am now well-stricken in years and will never see the extent of this possible revival, but there is hope - more hopeful than when I started 55 years ago.

And on that note I should end. But I have a short epilogue regarding a much more important subject than architecture whose revival today also seems even more unlikely, but runs parallel to British Architecture and that is …….. British Christianity.  And I realise that I may be poaching on the subject of one of our next speakers.

But like British traditional architecture British Christianity is the Renaissance or Revival or Reformation of 1st Century Christianity which is more ancient than Greece or Rome. And again, after the dark ages was rediscovered by divines like John Wycliffe in the 14th Century who inspired Luther and Calvin, who inspired the Scotsman John Knox and the English martyrs, Cranmer, Latimer and Ridley in the 16th Century. It was then taken up by poets like Milton and Bunyan and later by open air evangelists like Whitefield and Wesley.  It spread to America (Jonathan Edwards and many others) and back to Britain in the 18th and 19th Centuries with men like Simeon and Spurgeon, Cowper and Wilberforce, and the massive British Missionary movement to India, China and Africa, and even in the 20th Century there have been many outstanding, courageous (and almost unknown) ministers who upheld that same tradition.

The decline of British Christianity has not been so visible as the decline of Traditional Architecture, but the effect in the 19th Century of the German Higher Critical Movement, the writings of Kant and Voltaire and Matthew Arnold are some of the causes that led to apostasy and the growth of Liberalism, which now dominates all the Churches today.

At present those with Liberal convictions within both Catholic and Protestant circles, hugely outnumbers those with Biblically conservative convictions. But again convictions matter more than numbers.  And there are now signs that the worm could turn.

It may surprise you that I have recently put galleries into 3 Anglican churches and am now working on two more to provide space for growing congregations.  These churches have one thing in common: they all swim against the tide of the Modernist Liberal Agenda and they will not compromise on female ordination or same-sex marriage; because they are Biblically Conservative.  They may well have a hard time as Synod deprives them of their buildings, but like the Chinese church which has grown to over 100 million after 50 years of more intense persecution, they have a glorious future which the Liberal establishment never had or will.

So, surrounded by gloom and doom in our modern culture; there is still a certain hope of a far better future; and I begin to see some signs of it, this side of the grave.