'Another Country - is there a future for Tradition?' Conference in conjunction with the Quarterly Review 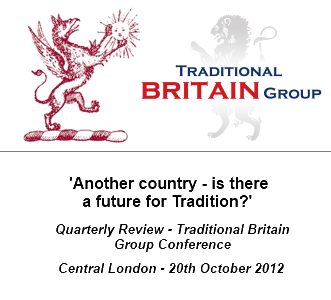 On 20th October, the Traditional Britain Group - a traditional conservative organisation - in conjunction with The Quarterly Review - an historic Tory journal - will be hosting an all day conference in central London titled, 'Another Country - is there a future for Tradition?'

The format will allow for a number of 30 to 40 minute talks, followed by plenty of time for questions and discussion. Coffee, tea and biscuits will be provided in the morning and afternoon. Lunch is NOT provided (in order to keep ticket costs low) but attendees will have an hour and can find places to eat nearby.

In addition to registering your interest via the EventBrite application below please also consider RSVPing on our Facebook event.

About the Traditional Britain Group:

Since World War II, serious assaults on our culture, heritage, constitution and institutions have gathered apace, leaving many dismayed and eager for change. Political correctness and enforced multiculturalism have watered down our rich national character and have forced honest and intelligent people to hide their true feelings for fear of reprisals.

Today liberal-left ideas are all pervasive, whilst the Conservative Party has failed to defend or preserve anything conservative or traditional. The organic and intrinsic, social, spiritual, legal and economic institutions of the British have been undermined and destroyed in the name of vague promises of equality and prosperity, whilst a transnational ideological, managerial and corporate elite dominate Europe with little accountability. The vacuum that remains has been filled by little more than blind consumerism, broken communities and socio-economic, environmental, spiritual and moral decline.

Infused with a new generation of enthusiastic and passionate activists, the Traditional Britain Group offers a focal point to promote ideas, discussion, networking, education and traditionalist action. We seek to provide to a home to the disillusioned patriot, and through traditional and modern media, we aim to bring together a broad alliance of those who desire a genuine, radical, conservative alternative

With courage, pride and determination, the Traditional Britain Group says, ‘No more! The ancient traditions, peoples and beliefs of these isles are worth preserving. There is an alternative for Britain. The fight back begins now!’

About The Quarterly Review:

The Quarterly Review contains a mixture of in-depth political essays on all the most important and controversial subjects, written by leading intellectuals and opinion-formers.

Our writers have included leading academics and public figures as well as a range of new writers, including Taki and Roy Kerridge.

The Editor is Derek Turner, the Deputy Editor is Dr Leslie Jones, the American Editor is Mark G. Brennan and the Australian editor is Edwin Dyga. The Managing Editor is Luise Hemmer Pihl. There are also regular features on music, film, classic books and poetry, plus rare articles from the QR archives.

The aims of the revived QR are the same as that of its famous forebear – to provide counter-intuitive writing for people who like to think.