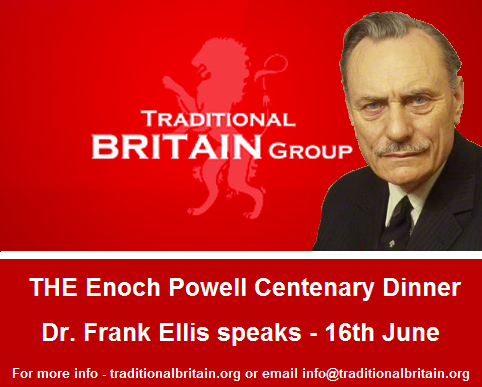 On June 16th the Traditional Britain Group is to hold the Enoch Powell Centenary Dinner, to celebrate the anniversary of the birth of almost certainly Britain’s greatest and most acclaimed politician of the post-war era. He is best known for his fervent and constant opposition to mass immigration which he referred to as a nation erecting its own funeral pyre. He was also implacably opposed to the European Union. He believed that Parliament was a place to “voice grievance, to demand that wrong be out right” and not a place for careerists.

This great genius was the youngest Classics professor ever in the British Empire, and after joining the forces in order to fight for his country in WWII he was in a short time elevated to the rank of Brigadier, again the army’s youngest ever. He was also a biblical scholar, a romantic and High Churchman. Whether in his major political speeches, in his interviews, his incidental or scholarly pieces, his books, or in his often disarming digressions on music and heraldry, it is his consistent balance of passion and judgement that all admired. Few men combined such knowledge with such emotion, fewer still have led public lives guided so constantly by a judgement unhampered by the need to conform to the prevailing winds of fashion, public opinion or to cave in to the media and The Liberal-Left.

Dr Frank Ellis has kindly and accepted an invitation to speak at the dinner. An appropriate guest of honour, Dr. Ellis was forced out from his position as a lecturer at the University of Leeds for alleged 'racism' in 2006 after stating controversial opinions that did not fit in with the cultural Marxist narrative.

The dinner will include a three course meal, including coffee. Drinks are not included but are very reasonably priced for a central London venue.

Join us to celebrate this great British hero!