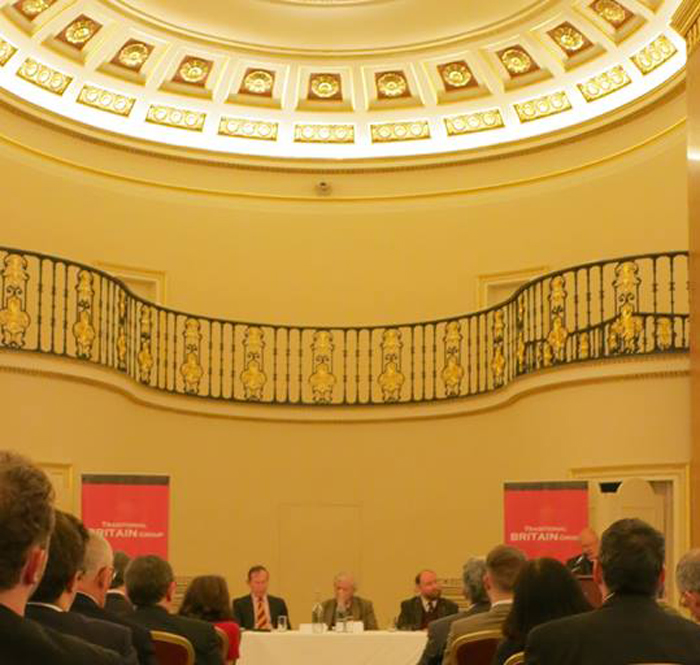 For those attending our event on Saturday.

- This is a ticketless event, names at the venue is sufficient (id for students)
- The dress code is formal smart casual (no leather or denim and at a minimum a shirt is required)
- We have now notified every one of the venue location. Let us know if you have not received anything.
- For new attendees, we require all guests to be respectful and courteous at all times. Those who we feel are not, may be asked to step out without refunds.
Any questions? info@traditionalbritain.org or message us on Facebook.
We look forward to welcoming you to a jam-packed agenda and guest list tomorrow.
There will be a social after the event at which all attendees are welcome to discuss the day, network and unwind. It's a good chance to meet a wide range of people from across the political spectrum.

Join us at a prestigious venue in central London on Saturday, 21st October for the premier annual conservative and traditionalist event of the year – the Traditional Britain Group Conference.

This day-long conference will bring together members and supporters alike to listen to a range of speakers from across the traditionalist, conservative and identitarian spectrum, many of whom are new faces for the TBG.

Following the conference is an opportunity to socialise, have a drink and discuss the day’s themes with like-minded individuals in a friendly and stimulating environment.

Our speakers will include:

Lord Sudeley will be presiding.

Reverend Dr Peter Mullen will address the conference on the subject of "Has The Church of England A Future?" He is a priest of the Church of England and former Rector of St Michael, Cornhill and St Sepulchre-without-Newgate in the City of London. He has written for many publications including the Wall Street Journal.

Anne Marie Waters is the director of Sharia Watch UK was a candidate for the UKIP leadership, coming second. She will be a well-known face to many having made many media appearances as an outspoken critic of the creeping Islamification of Britain and the spread of Sharia Law. She has stood in both council and general elections for Labour and UKIP. No doubt Anne Marie will give us the lowdown on her campaign for the UKIP leadership, thoughts on the outcome and unpleasant comments from party seniors following this. Anne-Marie Waters' 'For Britain' website can be viewed here.

Alexander Boot is a well-known conservative author who described himself as a "writer, critic and polemicist". He will address us on the subject of "How modernity destroys our political culture". He spends his time between London and Burgundy, where he is writing his latest book. His thought provoking essays and links to purchase his longer written work can be found on his website.

A leading continental Identitarian will speak to us as a representative of the growing European political grouping 'Generation Identity'. They will outline the growth of their movement, the ideals behind it and the difficulties intentionally placed in their way. For exactly this reason, we are - for now, at least, with our pretend 'Conservative' government - not disclosing the individual concerned. An outline of the roots and beliefs of the 'Identitarians' can be found here.

Dr. Frank Ellis, a Russian expert, will address the conference on “The relationship between Russia and the West today”. He is a former lecturer in Russian and Slavonic Studies at the University of Leeds.  He is the author of Vasily Grossman: The Genesis and Evolution of a Russian Heretic (1994), From Glasnost’ to the Internet: Russia’s New Infosphere (1999), The Macpherson Report: ‘Anti-Racist’ Hysteria and the Sovietization of the United Kingdom (2001),  Political Correctness and the Theoretical Struggle: From Lenin and Mao to Marcuse and Foucault (2004), Marxism, Multiculturalism and Free Speech (2006), The Eastern Front through the Eyes of Soviet and Russian Novelists (2011), The Stalingrad Cauldron: Inside the Encirclement and Destruction of the 6th Army (2013) and, most recently, Barbarossa 1941: Reframing Hitler’s Invasion of Stalin’s Soviet Empire (2015). In September 2017 he produced a long essay for the TBG’s website deconstructing and demolishing Baroness Sayeeda Warsi’s book The Enemy Within:A Tale of Muslim Britain.

Bjørn Christian Rødal,  is Vice-president of the newly-formed Norwegian party “The Alliance” (Alliansen). During the election, he held a dual position, both as initiator and leader for the party’s youth-organization and as a public front for the mother party. He is heavily engaged in organizing supporters and building the new party structure. Currently Bjørn is engaged with the Norwegian armed forces on a three-year contract as a part of a Quick Response Force, where he serves as an officer in the command staff.

The Alliance stands for Nationalism and Free Speech, National Identity and Culture. They argue that Europe’s current immigration crisis is inhibiting social progress and recommend removing the welfare incentives that lure immigrants to Europe. They are opposed to Norway’s EEA membership and condemn “destructive globalism”.  They also stress the relevance of our ancient European culture to our contemporary struggle: "Norway first. Vote the Alliance".

Patron Club Member tickets are only £30 if booked before September 21st and £35 thereafter. We have also absorbed the PayPal fees. This includes reserved seating if requested.

Patron club members are also invited to join our speakers and committee for lunch at a nearby restaurant on the day of the conference.

In the evening the conference will be followed by drinks at a nearby venue.

Venue details will be confirmed late afternoon on the day preceding the event. The venue is easily accessible via public transport and is located in central London in a pleasant and upscale area.

Dress code is smart casual. Gentlemen should wear a jacket, ties are not obligatory.

We look forward to seeing you on what will be an exhilarating and fascinating day of talks and discussion.

If you have any questions, we are at your service: info@traditionalbritain.org

We reserve the right to ensure our registrants are of best intent to ensure the smooth running of the day. To this end we very occasionally restrict entry.