The Committee of the Traditional Britain Group invite you to join us at the annual Traditional Britain Conference in Central London on October 8th. Bookings are open to all those of goodwill, regardless of whether or not you hold membership in our organisation but subject to the below.

We are in a position to outline some of our guests, but due to the activities of our opponents' dirty tricks, for now we will keep some of these undisclosed, as has become standard practice. At present we have 7 superb full speakers and an additional couple who will say a few words.

For the unitiated, this is an excellent event, that brings together a wide variety of good-spirited people from across the right-of-centre political firmament. After a full day of speeches, an external lunch and interesting discussions we retire to a nearby hostelry to both reacquaint ourselves with past friends and make new ones. It's a great mix of men and women, young and old. 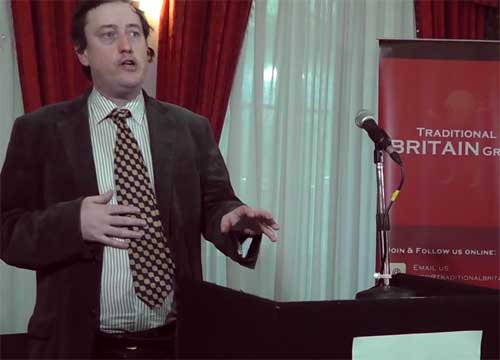 Professor Dutton returns again after some years to address us. He is best known for his weekly video discussions under the name of the 'Jolly Heretic'. They're best watched on Odysee, but he can also be found on anti-free speech platform, YouTube.

He is also an accomplished writer, with many works which combine real insights with great humour. His forthcoming book is entitled The Past Is A Future Country which looks at the tendency of socially conservative higher fertility rates to shape future population growth. Other works include Spiteful Mutants: Sexuality, Religion and Politics in the 21st Century; Witches, Feminism and the Fall of the West; Making Sense of Race; Islam: An Evolutionary Perspective; Race Differences in Ethnocentrism; and At Our Wits’ End: Why We’re Becoming Less Intelligent and What it Means.

Dr. Neema Parvini is an academic who has taught at various UK universities.

A frequently published author, initially on English literary subjects, particularly Shakespeare (including Shakespeare’s Moral Compass;    Shakespeare and New Historicist Theory; Shakespeare and Cognition etc.) He has also written The Defenders of Liberty: Human Nature, Individualism, and Property Rights and most recently published an instant classic political theory work entitled The Populist Delusion, an analysis of the illusion of popular sovereignty through a detailed review of the works of elite theory and theorists.

He also provides an online educational resource at  Academic Agency which currently boasts over 1,300 alumni on subject areas including economics, maths, politics, logic and rhetoric.

Before his academic defenestration, he regularly spoke at seminars and wrote articles for many sources including Quillette

Finally he is the regular host of the excellent Academic Agent on YouTube and Odysee.

Stefan Korte has worked for 7 years at the Bundestag for the AfD (Alternative for Deutschland) party as an advisor to AfD MEPs and is present on several crucial committees.

A well-known Euro-sceptic, with doctorates from Oxford and the French education system; a Lecturer in Political Science and History at ICES, the Catholic Institute of the Vendée, in Western France; currently Visiting Fellow at the Mathias Corvinus Collegium in Budapest; director of the Forum for Democracy International, the international wing of Thierry Baudet’s party in the Netherlands. He is a renowned expert on Russia and is frequently a contributor to international media on the subject. His books include, The Tainted Source: The Undemocratic Origins of the European Idea, A History of Political Trials; From Charles I to Charles Taylor; Travesty: The Trial of Slobodan Milosevic and the Corruption of International Justice;  Schelling versus Hegel: From German Idealism to Christian Metaphysics; and Russia: The New Cold War?(2008).

Christine Andersen, MEP, is a mother, economics graduate and businesswoman specialising in finance. Previously, she studied and worked in the US. She is considered to be on the traditional right-wing of the German AfD Party.

She is particularly critical both of Germany's membership of the EU and of the measures that some European nations took during the recent Covid lockdowns.

TBG stalwart Sam, who has had a wide -ranging career in law, academia and right of centre politics, gives a short speech on the ills of the day. After counsel, we gently edited a little.

Personal website (with a link to his autobiography): http://samswerling.co.uk
Sam on the TBG site: https://traditionalbritain.org/tag/sam-swerling/
Sam's political background: https://en.metapedia.org/wiki/Sam_Swerling

Dress code: smart casual and up.

Please email us email us if you have any questions or other requirements: info@traditionalbritain.org