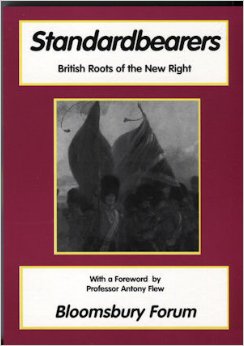 In the days of Cameron’s administration, any discussion of Great Britain’s imperial past often evokes nostalgia and a sense of regret by ordinary Britions. The past century witnessed Britain’s authority wane from a globe-spanning empire to a middle-ranked nation within the European Union. Monuments and equestrian statues of long-dead Victorian generals decorate English villages but many pass by unaware of their historical significances. Many schoolchildren grow up learning only of the nation’s history through Marxist and social democratic interpretations taught in comprehensive schools. Eric Hobsbawm’s stadialist interpretation of British proletarian advances utterly occludes the great figures who built the Empire and sustained it for King and Country. If the Right wishes to be successful in creating a genuinely popular movement, it must provide the people with a spiritual mobilisation that both legitimates and valorises Great Britain’s past. Such an intellectual effort produced the work Standardbearers: British Roots of the New Right (1999). Originally published by the right-wing Bloomsbury Forum and edited by barrister Adrian Davies, Eddy Butler and the late Jonathan Bowden, this volume consists of selected essays on British heroes and adventurers.

Standardbearers begins with Eddy Butler's excellent work on G.A Henty and his patriotic children's novels. Rather than extolling the virtues of single motherhood or indolence, Henty's heroes conquered African and Asian kingdoms in order to expand the empire. Henty's literary output consisted of two hundred titles with approximately eighty written for juvenile audiences. During the 1880s, each of his novels sold an average of 200,000 copies annually. Titles such as With Clive in India, With Wolfe in Canada or With Roberts to Kandahar all thrilled puerile imagination and inspired public schoolboys to strive for the Empire's glory. Still found in provincial libraries and school collections today, they are a reminder of Great Britain's glorious past. Similarly, William King's essay on John Buchan reinforces the role of literature in forming a cultural of national excellence. As an acculturated Scot and Brasenose graduate, Buchan's rapid ascent into British politics allowed him the experiences needed in order to realise Great Britain's history and potential. He desired to mobilise the Kingdom's people in order to strengthen its world position. His prodigious writings included fiction thrillers such as Prester John and vivid biographies such as his Sir Walter Scott. Attempting to continue within a Disraelian Tory tradition, Buchan's works are still in print for avid readers.

Besides the poets and bards of Empire, Standardbearers also discusses prominent statesman who can readily serve as models for our beleaguered present. Adrian Davies's excellent essay on Andrew Bonar Law analyses the 'unknown Prime Minister' and his achievements. Likewise, Sam Swerling's examination of Enoch Powell can rightly be said to be one of the finest short works on that remarkable man. Swerling correctly names Powells as a 'Tribune of the People and a Prophet Unfulfilled'. Similarly to Simon Heffer's official biography of Powell, the late Wolverhampton and Ulster MP benefited from having a sympathetic chronicler. Swerling rightly focuses on Powell's unionism and romantic notions of the nation. For Powell, Toryism coalesced and materialised the national will organise in Crown, Lords, Confession and People. Such a political philosophy must by definition remain uniquely British. It was precisely on this point that Powell disapproved of Margaret Thatcher's overweening fondness for the United States and its pervasive influence. He believed firmly that America possessed no 'special relationship' with Great Britain but only an alliance based on influence and temporal benefits. Powell's ultimate legacy proved to be a prophet in a Great Britain controlled by his enemies and former allies but his jeremiads were beloved by the nation's people.

Out of all the excellent chapters within Standardbearers, Derek Turner's piece on Samuel Johnson is exceptionally good. As an accomplished novelist and prose stylist, Turner's interest in Johnsoniana accords with his romantic Toryism. Combining legends of Johnson's remarkable wit with a serious analysis of his political views, Turner provides an appropriate introduction to the Tory sage's life and works. His fluid prose laced with Mannerist depictions provides an appropriate descant to this composite work.

Standardbearers provides a fine primer to intellectual antecedents for the British Right and those interested in their ideological forebears would do well to acquire a copy. It is an excellent introduction to half-forgotten figures whose lives and deeds can inspire us today.