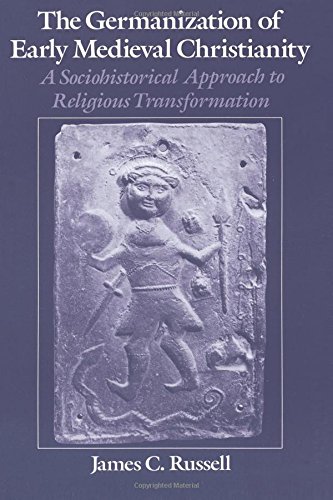 Paleoconservative intellectual Samuel T. Francis (1947-2005) reviews a fascinating work on Germanic Christian syncretism during the Dark Ages. This review was originally published in The Occidental Quarterly and is reproduced with kind permission.

Oswald Spengler wrote many years ago, “Christian theology is the grandmother of Bolshevism.” What he meant was that Christianity’s endorsement of such ideas as universalism, egalitarianism, peace, world brotherhood, and universal altruism helped establish and legitimize the ethics and politics invoked by socialists and communists. Socialists and communists don’t always agree, however, which is why another German scholar, Karl Marx, pronounced that religion is in fact a conservatizing force, the opiate of the masses, the drug that prevents the workers of the world from rebelling against their class enemies.

Both of these Teutonic heavyweights might have profited from reading James C. Russell’s The Germanization of Early Medieval Christianity, since it speaks, at least indirectly, to the tension between their different views of Christianity, differences that continue to be reflected in political and ideological disputes on the European and American right today. The main question in the controversy is this: Is Christianity a force that supports or opposes the efforts of the right to defend the European-American way of life? Christians on the right argue that their religious commitments are central to Western civilization, while pagans and secularists on the right (especially in Europe) argue, with Spengler, that Christianity undermines the West by pushing a universalism that rejects race, class, family, and even nation.

Mr. Russell, who holds a doctorate in historical theology from Fordham University and teaches at Saint Peter’s College, does not quite answer the question, but his immensely learned and closely reasoned book does suggest an answer. His thesis is that early Christianity flourished in the decadent, deracinated, and alienated world of late antiquity precisely because it was able to appeal to various oppressed or dissatisfied sectors of the population—slaves, urbanized proletarians, women, intellectuals, frustrated aristocrats, and the odd idealist repelled by the pathological materialism, brutality, and banality of the age.

But when Christian missionaries tried to appeal to the Germanic invaders by in- voking the universalism, pacifism, and egalitarianism that had attracted the alienated inhabitants of the empire, they failed. That was because the Germans practiced a folk religion that reflected ethnic homogeneity, social hierarchy, military glory and heroism, and “standards of ethical conduct ... derived from a sociobiological drive for group survival through ingroup altruism.” Germanic religion and society were “world-accepting,” while Hellenic Christianity was “world-rejecting,” reflecting the influence of Oriental religions and ethics. By “Germans,” it should be noted, Mr. Russell does not mean modern residents of Germany but rather “the Gothic, Frankish, Saxon, Burgundian, Alamannic, Suevic, and Vandal peoples, but also... the Viking peoples of Scandinavia and the Anglo-Saxon peoples of Britain.” With the exception of the Celts and the Slavs, “Germans” thus means almost the same thing as “European” itself.

Given the contradictions between the Christian ethics and world-view and those of the Indo-European culture of the Germanic peoples, the only tactic Christians could use was one of appearing to adopt Germanic values and claiming that Christian values were really compatible with them. The bulk of Mr. Russell’s scholarship shows how this process of accommodation took place in the course of about four centuries. The saints and Christ Himself were depicted as Germanic warrior heroes; both festivals and locations sacred in ancient Germanic cults were quietly taken over by the Christians as their own; and words and concepts with religious meanings and connotations were subtly redefined in terms of the new religion. Yet the final result was not that the Germans were converted to the Christianity they had originally encountered, but rather that that form of Christianity was “Germanized,” coming to adopt many of the same Indo-European folk values that the old pagan religion had celebrated.

Mr. Russell thus suggests, as noted above, a resolution of the debate over Christian universalism. The early Christianity that the Germans encountered contained a good many universalist tendencies, adapted and reinforced by the disintegrating social fabric and deracinated peoples of the late empire. But thanks to Germanization, those elements were soon suppressed or muted and what we know as the historical Christianity of the medieval era offered a religion, ethic, and world-view that supported what we today know as “conservative values”—social hierarchy, loyalty to tribe and place (blood and soil), world-acceptance rather than world-rejection, and an ethic that values heroism and military sacrifice. In being “Germanized,” Christianity was essentially reinvented as the dynamic faith that animated European civilisation for a thousand years and more.

Mr. Russell’s answer to the question about Christianity is that Christianity is both the grandmother of Bolshevism (in its early universalist, non-Western form) and a pillar of social stabilization and order (through the values and world-view imported into it through contact with the ancient barbarians). Throughout most of its history, the latter has prevailed, but today, as Mr. Russell argues in the last pages of his work, the en- emies of the European (Germanic) heritage—what he calls “the Euro-Christian religiocultural fusion”—have begun to triumph within Christian ranks. “Opposition to this fusion, especially as it might interfere with notions of universalism and ecumenism, was expressed in several of the documents of the Second Vatican Council,” and he sees the same kind of opposition to the early medieval Germanic influence in the various reform movements in church history, including the Protestant Reformation, which always demand a return to the “primitive church”—i.e., pre-Germanic Christianity. It is precisely this rejection of the European heritage that may have driven many Christians of European background out of Christianity altogether and into alternative forms of paganism that positively affirm their racial and cultural roots.

Mr. Russell has produced a deeply learned book that assimilates history and theol- ogy, sociology and comparative religion, and even sociobiology and genetics within its pages. Moreover, it is an important book that addresses a highly controversial and philosophically and culturally significant issue that few others will address at all.